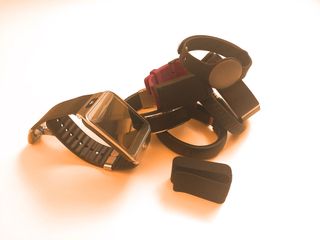 The Apple Watch enters fitness-tracker territory by offering ways to monitor your heart rate and daily exercise, but the device doesn't necessarily mean the end of earlier trackers like the Jawbone UP and Fitbit, experts say.

Unveiled yesterday (Sept. 9), the Apple Watch will have a fitness app that tracks how many calories you burn in a day, as well as how many minutes you exercise and how long you stand, the company said. The watch also has a heart-rate monitor and includes a workout app that tracks the speed, distance and duration of workouts.

In addition, several fitness-tracker makers — including Jawbone — have announced they are opening up their applications to support other company's hardware. This means that, not only can data from a Jawbone UP band be transferred to the Apple Watch (if you have both devices), but also you could theoretically use the Jawbone application to analyze data from your Apple Watch.

The fitness-tracker industry is trying to promote the idea that "it's not a one wearable world," Ledger told Live Science. "This is a world where you may have and use two or more wearables."

The software from some fitness trackers that were previously physical bands (hardware) that people could wear may be incorporated into the Apple Watch. This seems to have already happened with the Nike+ FuelBand. This year, Nike announced it would not be making new hardware for the FuelBand. But yesterday, Apple mentioned that FuelBand technology would be available in the Apple Watch. "Nike has agreed to move its smarts into the Apple Watch," Ledger said.

Another reason the Apple Watch does not necessarily mean "death" to fitness trackers is that many fitness trackers are considerably less expensive. The Apple Watch will cost about $350 when it comes out next year, whereas the Fitbit Flex, Withings Pulse O2 and Misfit Shine each cost around $100, and the Jawbone UP costs $150. Some fitness trackers, such as the Fitbug Orb , are available for as little as $50. "[It's] in a different price category," Ledger said.

In addition, "a lot of the activity trackers might just appeal to a different crowd of people," Ledger said. For example, someone specifically focused on changing his or her activity habits might not be in the market for an Apple Watch, Ledger said. "I don't think their customer base overlaps 100 percent," he noted.

Shane Walker, an analyst at research firm IHS Technology, agreed that the market for fitness trackers, which are dedicated solely to activity monitoring, would continue to grow, even as multifunctional devices like smartwatches are released. "Even with the advent of these relatively new devices, I still predict growth within dedicated monitors over the next few years," Walker said.

But as a smartwatch — that is, a wearable computer that can run applications — the Apple Watch is unique and may have more success than any other smartwatch to date, Walker said.

"[It's] the most interesting watch we've seen so far in the smartwatch race," Walker said. The device has a unique interface that enables a lot of control in a small space, Walker said, including a "digital crown" that turns to zoom in and out.

Apple will also release a tool kit for building apps for the watch, thus allowing developers to come up with creative uses for the device, Walker said.