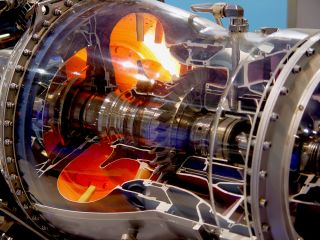 Much of the early work leading to the airplane involved gliders, and the 19th century saw dozens of glider experiments. Sir George Cayley expressed the principles of heavier-than-air flight starting in 1804, and in 1856, Jean-Marie Le Bris flew the first manned glider that climbed higher than its launch point. Le Bris did this by having a horse tow the glider along a beach.

The lack of a suitable engine thwarted many early efforts at powered, heavier-than-air flight. The first successful powered flight is credited to Orville and Wilbur Wright. The brothers incorporated the concepts of lift, weight, drag and thrust from a suitably powerful engine, and three-axis control of pitch, roll and yaw. In doing so, the inventors created the first airplane able to take off and climb on its own power, fly for a significant distance and make a controlled landing.

After the invention of fixed-wing airplanes, came the first rotary-wing aircraft, which include autogyros and helicopters. Based on principles first demonstrated in Chinese flying toys dating to 400 B.C., the idea of rotary-wing aircraft inspired many inventors to attempt vertical flight with rotating propellers. A number of small models powered by springs and rubber bands were built, but again, the first true helicopter had to wait for a suitably powerful engine.

Helicopter and autogyro designs progressed incrementally over the next few decades. Juan de la Cierva is credited with inventing the autogyro, a type of aircraft with fixed wings that uses a rotor for lift and a propeller for thrust. His advancements in rotary design led directly to the first modern helicopter, which is generally attributed to Igor Sikorsky in 1942.

The other side of aerospace engineering is rocketry and spacecraft. The most famous pioneers in this field were Robert Goddard, who constructed and successfully launched the first liquid-fueled rocket; Werner von Braun, who developed the first ballistic missile and went on to become the first director of NASA's Marshall Flight Center; and Konstantin Tsiolkovsky, who is considered the Russian father of rocketry.

Several astronauts were aerospace engineers, including Kalpana Chawla, the first Indian-born woman in space, who died in the space shuttle Columbia disaster; and Neil Armstrong, the first man on the moon. Armstrong himself once said: "I am, and ever will be, a white socks, pocket protector nerdy engineer."

What does an aerospace engineer do?

Aerospace engineers design aircraft, spacecraft, satellites and missiles, according to the BLS. In addition, these engineers test prototypes to make sure that they function according to plans. These professionals also design components and subassemblies for these craft; those parts include engines, airframes, wings, landing gear, control systems and instruments. Additionally, engineers may perform or write the specifications for destructive and nondestructive testing for strength, functionality, reliability, and long-term durability of aircraft and parts.

Here are some recent developments of note in aerospace engineering:

Today's aerospace engineers still work with the basic concepts of aerodynamics, and must also have a working knowledge of aircraft power plants such piston engines, turbo props and jets, the BLS said.

Astronautical engineers must also understand additional concepts, such as spacecraft propulsion systems, which include solid- and liquid-fuel rockets, along with ion drives. Manned missions require life support systems to provide air, food, water, temperature control and waste handling, so spaceflight engineers must also be familiar with these concepts.

Aerospace engineering requires in-depth skills and understanding in physics, mathematics, aerodynamics and materials science. These professionals must be familiar with advanced materials such as metal alloys, ceramics, polymers and composites, the BLS said. This knowledge allows engineers to predict the performance and failure conditions of designs before they are even built.

More and more, aerospace engineers rely on computer-aided design (CAD) systems for quick and easy drafting and modification of designs and 3D visualization of finished parts and assemblies. Computer simulations have become essential for performing virtual testing of engines, wings, control surfaces, and even complete aircraft and spacecraft under all possible conditions they might encounter.

According to Robert Yancey, vice president of Aerospace Solutions at Altair Engineering, Inc., "Simulation is having a greater impact on defining concept designs. This is requiring design engineers, who traditionally do not have skills in simulation, to start to develop some competency in simulation." Computer simulations have greatly reduced the dangers to test pilots and the cost of failed missions.

Where do aerospace engineers work?

Most aerospace engineering jobs require at least a bachelor's degree in engineering. Many employers, particularly those that offer engineering consulting services, also require certification as a professional engineer. Promotion to management often requires a master's degree, and engineers need ongoing education and training to keep up with advances in technology, materials, computer hardware and software, and government regulations. Additionally, many aeronautical engineers belong to the American Institute of Aeronautics and Astronautics (AIAA).

Some aerospace engineers work on projects related to national defense and thus must obtain security clearances, according to the BLS.

What is the future of aerospace engineering?

The BLS projected the employment of aerospace engineers to grow 7 percent between 2012 and 2022, slower than the average for all occupations. However, "there should be many opportunities for highly qualified applicants, particularly those who have kept abreast of the latest developments in technology," the BLS said. "Having good grades from a highly rated institution should give a job seeker an advantage over the competition."