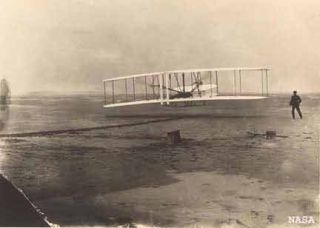 On Dec. 17, 1903, The Wright Brothers' Flyer was the first powered airplane to execute controlled and sustained flight.
(Image: © NASA)

The Wright Brothers' first flight lasted just 12 seconds and made it into only four newspapers the next morning. The pioneering, 120-foot flight in a fragile airplane over Kitty Hawk, North Carolina, may have gone off with little fanfare that day in 1903, but it would soon have enormous implications that flew around the world. Brothers Orville and Wilbur Wright did not invent flight, but they became the Internet of their era with their invention of the Flyer, which was the first manned, powered, heavier-than-air and (to some degree) controlled-flight aircraft, bringing people and ideas together like never before. In just a few decades, the basics of their science and engineering became instrumental in warfare, put globalization on the map and man on the moon.

Wilbur Wright: Enthusiast, not a crank

The birth of aeronautical science originated not from the laboratory of a respected university, but the back room of a bicycle shop in Dayton, Ohio.

Interest in aeronautics had exploded during the 19th century, as the technical how-to finally began to catch up with humanity's centuries-old interest in flight. Several scientists tested gliders throughout the 1800s, filling data tables about lift and drag, but no gliders ran on power other than that provided by the wind. A steam-powered airship built by Henri Giffard flew successfully in 1852, marking what many now call the  first powered flight.

Step one for the Wright Brothers was to do a literature search on the state of aeronautical knowledge at the time. In 1899, Wilbur wrote this letter to the Smithsonian Institution, requesting copies of all the past research done:

"Dear Sirs: I am an enthusiast, but not a crank in the sense that I have some pet theories as to the proper construction of a flying machine. I wish to avail myself of all that is already known and then if possible add my mite to help on the future worker who will attain final success.”

The brothers studied up on hang-gliding flights of Otto Lilienthal and work done by Sir Georg Cayley, called the founder of aerodynamics. They picked the brain of Octave Chanute, an engineer who had worked to invent an airplane and written a book, “Progress in Flying Machines.” Paying the bills with sales from their bike store, Wilbur (the visionary) and Orville (the engineer) set to work on a flying machine. The brothers started by building kites based on the flight mechanics of birds they had observed and moved onto manned gliders.

Four years after Wilbur's humble letter, the Wrights were ready to test an aircraft powered by an engine and propeller. The biplane design was based on Chanute’s biplane glider.

On Dec. 17, 1903, Orville climbed into the primitive cockpit and lifted the Flyer from the level ground of Kitty Hawk into the air and flew for 12 seconds before landing with a thud 120 feet away. Kitty Hawk was chosen for its consistent winds, which were good for testing kites and gliders and also good for taking off with an underpowered airplane: While strong wind gusts could be dangerous, a good consistent headwind allowed a plane to take off when its own power might not get it off the ground in windless conditions.

The brothers made four flights that day, the last one soaring 852 feet and lasting almost one minute, launching the world into the aviation age for good.

From Kitty Hawk to outer space

When news about their feat at Kitty Hawk reached the newswires, the Wright brothers became instant celebrities. The scientific reaction was swift, too, with competitive inventors attempting their own flying machines in cornfields around the world.

It was the U.S. government that encouraged the first mass manufacturing of the airplane, which it saw as a potentially powerful weapon and reconnaissance vehicle. When World War I broke out in 1914, there was a new battlefield for the first time in millennia. Airplane technology sped up dramatically during the war and was a pillar of the wartime economy.

By the 1930s, the U.S. had four airlines delivering millions of passengers, limited mostly to the upper class, to points across the country and the Atlantic Ocean and, by the end of the decade, the Pacific. With the dawn of commercial air service, the world opened up in a new way, allowing people to visit places they'd only read about in books.

Aviation greatly affected the outcome of World War II, too, and war equally affected aviation. Airplanes carried paratroopers across the English Channel, dropped the first atomic bomb and, by the end of the war, its manufacturing had helped put the United States at the forefront of all the world's postwar economies, where it remained until the 1970s.

There was nowhere to go but up. The birth of the jet age in the 1950s, man's first steps on the moon, even Richard Branson's just-announced commercial space tourist plan, all have their scientific roots in the field of Kitty Hawk.

In less than 100 years, the Wright's shaky craft had turned into a vehicle fit to explore outer space.