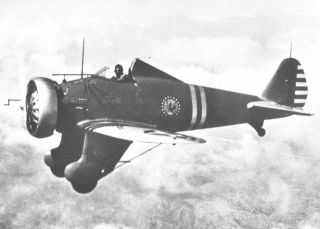 Early fighter planes had no cabin pressurization, much less a cabin. The Army Air Corps began using the Boeing P-26 Peashooter in 1933.

The Allied airmen and women of World War II were certainly brave and skilled in battle, but even they couldn't win the war on their own.

Plagued in the early, low-tech years of the war by dangerous afflictions such as altitude and decompression sickness, pilots got some help behind the front lines from a team of American physiologists who studied the effects on the body of flying.

Their research, which involved at least one parachuting dog, and the technology it initiated was a key to the Allied victory in the air, says Jay B. Dean of the University of South Florida College of Medicine.

"[Pilots] had two enemies — they had the enemy shooting at them and they had the unseen enemy, which was the environment," he said. "The physiologists knew that they had to do something to learn to protect the health of the war fighter."

Dean presented his research at a recent Experimental Biology conference in San Diego and is working on a book about Allied advances in aviation physiology.

Aviation in the late 1930s and early 1940s, just under 40 years removed from the Wright brothers' feat at Kitty Hawk, was nothing like the high-tech industry it is today. When World War II began, planes weren't heated or even pressurized, even though pilots were forced to climb to very high altitudes to avoid the enemy.

"They were supposed to fly at about 25,000 feet; well, they were pushing them up to 30,000 and 35,000 feet to try to get above the enemy flak from the ground," Dean said. At that height, the airmen were exposed to temperatures of 40 below to 70 below zero Fahrenheit, as well as very low air pressure.

"If there's less pressure, there's less oxygen," Dean said, "and you begin to lose your ability to think clearly. You can imagine trying to wage warfare and have a sharp mind if you're slowly becoming hypoxic," or losing oxygen content in the blood, he said.

Though the Allies had kept up with the Axis powers in aircraft technology, their knowledge about how the body reacted to high altitudes lagged well behind, according to historical accounts. The tests that began a few years after the War began became crucial to the military effort, Dean said.

"The air war had become a physiological war," Dean said in a recent interview, noting that the common perception "was that the first power to fly routinely at 40,000 feet would win."

Starting out with just one hypobaric chamber, which mimics the conditions of a high altitude environment, an Ohio laboratory set up by World War II physiologists quickly focused on finding solutions to the worst problems pilots faced, Dean said.

About one quarter of the men on bombing missions — which could last up to 10 hours —complained of decompression sickness, the painful blood affliction scuba divers commonly call "the bends." The physiologists discovered that the effects of the bends could be minimized by breathing pure oxygen before takeoff.

Blood tests and lung capacity tests were also conducted to figure out the limits of the human lung. When the simulations weren't sufficient, the physiologists put their bodies on the line, Dean said.

One doctor made a high-altitude jump himself to experience the strain on the body, nearly killing himself, and was able to calculate exactly when an airman's parachute should be opened to limit the impact of the g-forces, said Dean. And "Major," a 145-pound St. Bernard dog, was also tossed from a plane at 26,000 feet to test parachute straps at a high altitude.

Sporting his own custom oxygen mask, Major dog-paddled all the way down and landed safely, witnesses said.

Relevant to the space program

The research conducted during the War was relevant long after 1945, Dean said.

"A lot of what we learned about pulmonary mechanics came from the war effort, when they were developing the oxygen-breathing equipment," he said.

And just like their WWII predecessors, astronauts performing space walks outside the pressurized safety of their shuttle today still breathe pure oxygen for 12 hours to reduce the risk of the decompression sickness.