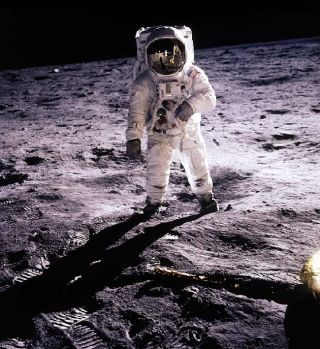 Neil Armstrong took this picture of Buzz Aldrin, showing a reflection in Aldrin's visor of Armstrong and the Lunar Module during the Apollo 11 mission, which landing on the Moon on July 20, 1969. This is one of the few photographs showing Armstrong (who carried the camera most of the time) on the moon.
(Image: © NASA)

Is Texas nuts? Vote below.

If you thought efforts in recent years by Texas educators to undermine the well-founded theory of evolution on behalf of a religious agenda were disingenuous, this one will send your blood pressure into the stratosphere and beyond:

At issue: The review team says the first man on the moon was not a scientist. Wrong.

As Berger notes, Armstrong got an aeronautical engineering degree from Purdue University, and a Master of Science degree in aerospace engineering from the University of Southern California.

"I find your reported decision to omit Mr. Armstrong's name from the 'science strand' in Texas's fifth grade textbooks totally ridiculous and unjustified. I wonder how many of your board members actually know anything about Armstrong's career other than he was first man on the Moon? … As for him not being a 'scientist,' I dare say your Board members need a better understanding of what engineers do and how they do it, and how Armstrong was much more than a pilot; he was an engineering research pilot and astronaut whose every flight connected in important ways to the science of flying."

Armstrong himself once said: "I am, and ever will be, a white socks, pocket protector nerdy engineer." And what does he think about the definition of science vs. engineering? "Science is about what is; engineering is about what can be," the nerdy astronaut said back in 2000.

Okay, so if the Texas argument is that a scientist is someone who conducts raw science, as opposed to dreamy engineering stuff, then here's a tidbit from history: On the moon, Armstrong helped set up the Early Apollo Scientific Experiment Package. And of course he helped bring back moon rocks, following scientific protocols, so they could be studied. Scientists say much of what's been learned about the moon is the result of studies conducted by Apollo astronauts and research done on the dust and rocks they brought back.

(Aside: Check out this creative account, by Armstrong, of a moon rock named "Bok" being brought to Earth for scientific purposes.)

There's another side to this, argues biology professor PZ Myers. Myers contends that the recommendation, while based on a faulty assumption, is not unreasonable because the state should lay out broad guidelines for instruction and not be involved in niggling details.

"What the curriculum should do is say that the social studies classes for that grade level should do is discuss the space program, its goals and its effects on American society," Myers writes. "It shouldn't be saying that the teacher has to do this by asking students to memorize the names of famous astronauts."

Yeah, okay. Ahem and, well, after all, we're only talking about the first man on the moon.