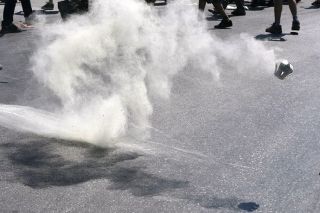 Violent protests have ravaged Ferguson, Missouri since Aug. 9, after a police officer shot and killed an unarmed 18-year-old who is believed to have robbed a convenience store. The Ferguson Police Department has been criticized for its crowd control tactics that have included plumes of tear gas, sprays of rubber bullets and loud blasts from sound cannons.

Last week, the Ferguson Police Department released the incident report from the shooting. Police Chief Thomas Jackson identified the officer who shot Brown as Darren Wilson, who has been a member of the police force for six years, the New York Times reported. The release of the incident report has rekindled anger among Ferguson residents, and some see the action as an attempt to justify the shooting of Brown, prompting worries that protests could take another violent turn.

If that happens, police will likely continue using tactics to keep protestors under control, but how do these crowd control technologies work and how dangerous are they? [10 Historically Significant Political Protests]

Tear gas is a nonlethal chemical weapon. It comes in different forms, and pepper spray is even considered a type of tear gas. But the most widely known type, and the kind police are using in Ferguson, is CS gas. This variety of tear gas targets the eyes and causes searing pain, tearing and in some cases even temporary blindness, said Hamish de Bretton-Gordon, a chemical weapons specialist and chief operating officer of SecureBio, a chemical, biological, radiological and nuclear security firm in the United Kingdom.

Tear gas also acts as an asphyxiant, meaning it makes it difficult to take in oxygen. When humans breathe in the gas, it mixes with liquid in the lungs. This can cause coughing and difficulty breathing, and those who have been exposed become disoriented and dizzy, and often vomit if they swallow the chemical. [5 Lethal Chemical War Agents]

"It's so unpleasant that it renders you incapable of doing anything productive, which is exactly the goal of crowd control,"de Bretton-Gordon told Live Science.

The Chemical Weapons Convention in 1993 made it illegal for signatory countries to use tear gas in warfare. However, it's perfectly legal to use the weapon for civil crowd control against a country's own citizens.

Police have used tear gas in the United States during major civil protests, including the Occupy Wall Street movement and now in Ferguson.

The effects of tear gas usually don't last more than 30 minutes. If people exposed to tear gas can get to an open area with fresh air, then they typically recover quickly, de Bretton-Gordon said. But using tear gas to control crowds poses a danger, because it acts as a chemical toxin and some people react much more severely than others. The damaging effects also depend on how much tear gas people are exposed to. In some cases, the gas can kill people, especially those who have serious pre-existing medical conditions, de Bretton-Gordon said.

Even the explosion of tear gas is dangerous if it's not deployed properly. The blast alone can seriously injure people, de Bretton-Gordon said.

Police forces that use tear gas wear gas masks to avoid harming themselves, but there are also some low-tech forms of protection. Wearing swimming goggles can protect the eyes, and a damp cloth soaked in a compound like urea can protect the lungs, de Bretton-Gordon said.

Rubber bullets are usually made with a heavy type of plastic or rubber, and are about half an inch to 1 inch (1.3 centimeters to 2.5 centimeters) thick, and about 2 inches (5 cm) long, with a blunt end, de Bretton-Gordon said. The bullets are often used for animal control, but police also occasionally use them to manage protests.

Rubber bullets can cause a lot of pain and can sometimes penetrate the skin, but serious injury is more common when the bullets are fired from a range closer than 65 feet (20 meters), according to a report by Dr. Timothy Hardcastle, deputy director of trauma service at Inkosi Albert Luthuli Central Hospital in South Africa.

Normally, police forces aim low when firing rubber bullets at a crowd, to knock people over rather than cause serious harm. The bullets are also fired at a lower speed than regular ammunition. However, a stray bullet that hits someone in the head or face can be fatal in some extreme cases, de Bretton-Gordon said.

A study published in 2013 in the Journal of Emergencies, Trauma and Shock examined 64 patients who were hospitalized after being hit with rubber bullets during protests in Kashmir from 2008 to 2010. The bullets caused only blunt injuries in 46 patients, but penetrated the skin in 18 patients, killing one when the bullet hit a major artery. The researchers note that younger people and women are more likely to suffer severe injuries, because of their smaller builds.

Police may also use sound cannons to blast the ears of protestors and discourage them from congregating in one place. Several kinds of sound cannons exist, but the ones police forces are using in Ferguson are called Long Range Acoustic Device (LRAD) instruments. LRAD Corporation initially designed the instruments for the U.S. Navy, as part of its Shipboard Protection System used to deter pirates and to hail other ships.

The sound systems are now used by police to communicate with large crowds and send out powerful warning blasts for crowd control. The blasts can reach beyond 6,560 feet (2,000 m), according to LRAD Corporation's website.

Typical human conversations happen at about 60 decibels (dB). A blast of 120 dB or more can lead to hearing loss, according to the Centers for Disease Control. The LRAD model that police appear to be using in Ferguson can reach up to 149 dB, Slate.com reported.

The maximum decibel level for each model is measured from a distance of 3 feet (1 m), E. Brian Harvey, director of investor relations and capital markets for LRAD Corporation, told Live Science in an email. Every time the distance from the instrument doubles, the sound intensity decreases by 6 dB. Covering one's ears reduces the sound intensity by about 25 dB, according to Harvey.

The protests in Ferguson have launched widespread debate on police reform and the need for demilitarization of police forces in the United States.