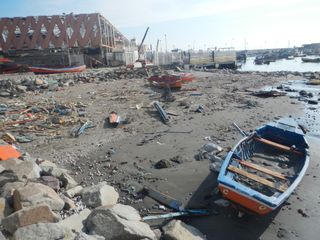 The powerful earthquake that rocked Chile in April ruptured the earth in a way that suggests major quakes may still hit the region in the future, researchers say.

The powerful earthquake originated in a seismic hot spot that has produced some of the world's strongest known tremors. The area is a subduction zone, where one tectonic plate dives beneath another — specifically, the oceanic Nazca Plate is plowing under the Pacific coast of the South American Plate at an average rate of about 2.75 inches (7 centimeters) per year. Major quakes that burst at subduction zones, the most tectonically active places on Earth, are known as megathrust earthquakes. [In Photos: This Millennium's Destructive Earthquakes]

Another big one looming?

The last time a great earthquake happened on this section of the boundary between the tectonic plates was in 1877, when a much larger event about magnitude 8.8 ruptured nearly 310 miles (500 km) of a fault. Past studies of the amount of deformation of the Earth's surface revealed that much of that fault is currently fully locked in position, building up stress. This dangerously strained part of the plate boundary is what is known as a seismic gap — a portion of a fault that is overdue for one or more powerful earthquakes.

"We had known about the potential for a large event in this region for some time," said Gavin Hayes, a seismologist at the United States Geological Survey in Golden, Colorado, and lead author of one of two studies examining the 2014 Chile quake appearing in the Aug. 14 issue of the journal Nature.

However, the 2014 quake was smaller than the major earthquake that researchers were anticipating. "I think most people expected that the large event, when it came, would be bigger than it was; that it would probably repeat what we saw in 1877, and so would be magnitude 8.5 or larger," Hayes told Live Science.

After modeling seismic data from the earthquake as well as the amount of deformation of the Earth's surface, Hayes and his colleagues found the 2014 quake did not rupture the entire seismic gap.

"There is still a lot of stored strain in this subduction zone, meaning the hazard still remains," Hayes said.

In a separate study appearing in the Aug. 14 issue of the journal Nature, lead study author Bernd Schurr at the German Research Centre for Geosciences in Potsdam and his colleagues found the 2014 quake broke a 93-mile-long (150 km) portion in the center of the seismic gap. However, only one-third of the seismic gap was broken — two large segments of the seismic gap north and south of this ruptured portion remain, and pose a significant hazard.

Hayes and his colleagues noted that in the three weeks before the great earthquake, more than 80 earthquakes, between magnitudes 4.0 and 6.7, shook the area. These warning signs of the major quake to come occurred in the form of foreshocks that were part of a slow unraveling process. Schurr and his colleagues suggest that smaller earthquakes starting in 2013 weakened the plate boundary, helping set the events of this year in motion.

Although both groups suggest a large earthquake will occur in northern Chile in the future, "the difficult thing is we cannot tell when it will occur, even knowing as we do that parts of this subduction zone have not ruptured for close to 150 years, and have been further 'loaded' by the 2014 events," Hayes said.

The most likely place for this inevitable megathrust earthquake "seems to be the section immediately to the south of the 2014 earthquakes, but other sections are still hazardous, such as the stretch north of the 2014 sequence," Hayes said. "Unfortunately, earthquake prediction is still elusive, and we cannot give a precise date or size of a future event."