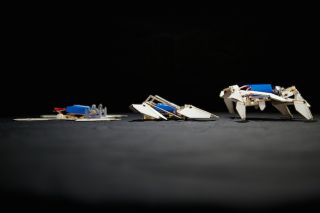 The latest advancement in robotics may not look like much — just a few small batteries attached to a flat sheet of paper — but there's much more to this new contraption than meets the eye.

If you look long enough, you'll see the sheet of paper start to move, transforming itself with a few crisp folds. First, legs emerge, and then batteries are lifted off the ground, onto the back of what now looks like a small robotic bug. Within minutes, the futuristic insect is moving, crawling around on four legs and turning as if it knows just where it's headed.

This real-world Transformer, developed by computer and electrical engineers at the Massachusetts Institute of Technology (MIT) and Harvard University, could change the field of robotics. Researchers say the self-assembling robot represents a new way to build bots, a process that will make it easier to churn out complex machines in less time. [See video of the real-life transformer in action]

The new robots were inspired in part by origami, the Japanese art of paper folding. While they look thin enough to be made from a single sheet of paper, the bots actually consist of five layers of materials, including paper, copper and a shape-memory polymer that folds when heated to more than 212 degrees Fahrenheit (100 degrees Celsius). The middle, copper layer contains a network of electrical wires that deliver heat to the robot's joints, initiating a complex folding process.

"We activate the folding using embedded circuits, which produce heat locally at each hinge," said Sam Felton, a research assistant in Harvard's microbiotics lab, who helped develop the new robot.

This method lets the robot fold itself one step at a time, which is important because the researchers programmed the bot to build upon each previous movement, Felton said. First, it makes one fold, then another.

Once the robot is all folded up into its buglike shape, it seems to move as if by magic. In reality, though, it's propelled by two tiny motors, which are connected to the batteries carried on the bug's back, the researchers said. Also on the robot's back is a microprocessor, programmed with a unique algorithm developed by computer scientists at MIT. The microprocessor tells the robot what to do — what shape to take and how to move.

The robot's ability to fold itself up isn't just a cool trick; it's also an extremely useful quality, said Robert Wood, a professor of engineering at Harvard University who helped develop the new robot. Wood said he first became interested in origami-like folding when he realized it might help solve some of the common problems of manufacturing devices on a small scale.

Folding allows the manufacturers of small, complex machines, such as robots, to avoid the nuts-and-bolts approach traditionally used to assemble larger machines, Wood said. It also reduces the cost of building these machines. Both of these benefits make the origami production process a good fit for robotics, said Daniela Rus, a professor of electrical engineering and computer science at MIT who also worked on the self-assembling robot.

"Today, it costs a lot in time and money to make a new robot," Rus told reporters in a press briefing. "Our big dream is to really make the fabrication of robots fast and inexpensive." [The 6 Strangest Robots Ever Created]

The researchers said that this new method of building machines could serve as a form of 3D printing for robotics, turning a complex manufacturing process into something that's both more accessible and less expensive for the average user.

The researchers said they also envision the folding machines filling some crucial roles in the real world.

"I believe there's a tremendous potential to use these methods to build machines for situations where you need deployability, for example space exploration, or dangerous missions such as search and rescue, or hazardous environment exploration," Wood said.

But before these tiny bots travel into space or other harsh environments, the researchers will need to experiment with stiffer and more-durable materials. The engineers also said they're looking into the use of materials that can also unfold themselves, something shape-memory polymers, once heated, can't do.

The new research was published online today (Aug. 7) in the journal Science.