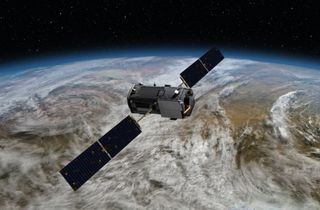 A new NASA spacecraft is about to embark on a mission to watch Earth breathe.

Before dawn on July 1, the $465-million Orbiting Carbon Observatory-2, or OCO-2 for short, will launch from Vandenberg Air Force Base in California.

Then, from its perch 438 miles (705 kilometers) above the planet, the satellite will begin a two-year study of how carbon dioxide (CO2) — a heat-trapping gas that is driving climate change — cycles through the Earth's atmosphere. [6 Unexpected Effects of Climate Change]

Human activities, such as burning fossil fuels, now add nearly 40 billion tons of carbon dioxide into the air each year. But when scientists tally these greenhouse gas emissions against actual carbon levels in the atmosphere, their totals suggest some CO2 vanishes into land- and ocean-based traps called carbon sinks.

"I think it's quite remarkable that over the past decades, we've seen that half of the carbon dioxide we put in the atmosphere is removed by natural processes," Mike Gunson, an OCO-2 project scientist at NASA's Jet Propulsion Lab (JPL) in Pasadena, California, told reporters in a press conference Thursday (June 12). "But we still aren't quite sure what the details are, which are the key processes involved here."

The ocean is believed to be hoarding some of this carbon. And recent studies have hypothesized where the rest is being stored on land, pointing to rainforests and even semi-arid grasslands and large swaths of North America, Gunson noted. But the precise location of these natural land-based carbon sinks is not well understood. OCO-2 promises to offer a more complete picture of the global geographic distribution of the sources and sinks of carbon dioxide, and how and why they change over time, the project scientists said.

"Understanding the details of those processes will give us some insight about the future and what's likely to happen over the next decades, even if we continue to consume more and more fossil fuels and emit more and more carbon dioxide into the atmosphere," Gunson said.

OCO-2 is packing just one scientific instrument, comprised of three spectrometers that will disentangle sunlight from the fluorescent light plants give off when they absorb carbon through photosynthesis. This detector is sensitive enough to make out an area as small as 1 square mile (just under 3 km) on the planet's surface. The satellite will orbit Earth 14.5 times each day. A cycle of 233 orbits will take it over any given spot on the planet every 16 days, the scientists said. During each of these cycles, OCO-2 will collect about 16 million measurements, according to NASA.

OCO-2 is a replacement for the doomed $275-million OCO spacecraft that crashed into the ocean near Antarctica in 2009, after part of the Taurus rocket designed to protect the satellite failed to separate during launch.

"It was heartbreak. The entire mission was lost," said Ralph Basilio, OCO-2 project manager at JPL. "We're excited about the opportunity to complete some unfinished business."

The start of the OCO-2 mission comes on the heels of a new proposal issued by the Environmental Protection Agency (EPA) to cut carbon emissions by 30 percent from 2005 levels over the next 25 years. OCO-2 is also the second of five NASA Earth science missions launching in 2014. Others include the Soil Moisture Active Passive (SMAP) mission, which is scheduled to lift off in October to track the water hiding in Earth's soil.