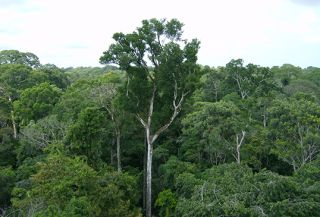 Pristine Amazon forests pull in more carbon dioxide than they put back into the atmosphere, according to a new study. The findings confirm that natural Amazon forests help reduce global warming by lowering the planet's greenhouse gas levels, the researchers said.

But the model of a rainforest as carbon sink is based on small, heavily-studied tree areas called test plots, which means the concept could lose its accuracy when scaled up to the size of a continent. For example, in the Amazon forest, huge swaths of trees can die at once, which can't be accounted for by test plots. In 2005, a single storm killed half a billion trees in the Amazon forest. [Amazon Photos: Trees That Dominate the Rainforest]

"We found that large natural disturbances — the sort not captured by plots — have only a tiny effect on carbon cycling throughout the Amazon," study co-author Sassan Saatchi of JPL said in a statement.

The study did not account for tree deaths from logging or deforestation, the researchers said.

The Amazon River basin is home to the largest rainforest on Earth, covering about 2.67 million square miles (6.9 million square kilometers) in seven countries. Each year, about 2 percent of the entire Amazon forest dies of natural causes. The researchers found that only about 0.1 percent of those deaths are caused by blowdowns.

The findings were published March 16 in the journal Nature Communications.