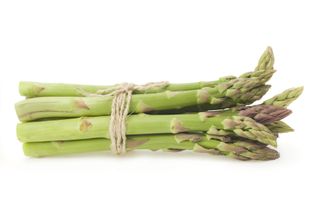 In ancient times, asparagus was renowned as an aphrodisiac, and maybe for good reason. This succulent, savory vegetable contains a stimulating blend of nutrients that help boost energy, cleanse the urinary tract and neutralize excess ammonia, which can cause fatigue and sexual disinterest.

Furthermore, the vegetable contains the amino acid asparagine, which is important in the development and function of the brain, according to a study published in 2013 in the journal Neuron. It also contains chromium, a trace mineral that helps insulin do its job transporting glucose. It's also especially rich in glutathione, a detoxifying compound that can help destroy carcinogens. For this reason, asparagus may help fight or protect against certain cancers, including bone, breast, lung and colon cancers.

Asparagus is extremely low in calories at about 20 per serving (five spears), has no fat, and is low in sodium. It can be eaten raw or cooked; however, cooking times affect health benefits. A 2011 study published in Food Chemistry examined blanching (cooking asparagus briefly in boiling water) and saw a marked difference in the asparagus depending on how long the vegetable was submerged. In general, the longer the asparagus was blanched, the more nutrients it lost, though cooking it for too short a time resulted in hard stalks. Furthermore, the tip, middle and bottom sections of the spears had different sensitivities to blanching times, with the tip being the most likely to lose nutrients quickly. The authors of the study therefore recommend blanching different segments of asparagus for different lengths of time.

Here are the nutrition facts for asparagus, according to the U.S. Food and Drug Administration, which regulates food labeling through the National Labeling and Education Act:

Asparagus is good for your ticker in a variety of ways. Flores noted, "Asparagus is extremely high in vitamin K, which helps blood clot." And the vegetable's high level of B vitamins helps regulate the amino acid homocysteine, too much of which can be a serious risk factor in heart disease, according to Harvard University School of Public Health.

The Mayo Clinic notes that vitamin B6 may affect blood sugar levels and advises caution for people who have diabetes or low blood sugar. However, those with healthy levels can benefit from asparagus's ability to regulate it.

Lowering the risk of type 2 diabetes

As with heart disease, risk of type 2 diabetes increases with excessive inflammation and oxidative stress. Therefore, asparagus' impressive anti-inflammatory properties and high levels of antioxidants make it a good preventive food. A 2011 study published in the British Journal of Nutrition also suggested that asparagus' ability to improve insulin secretion and improve beta-cell function also helps lower the risk of type 2 diabetes. Beta cells are unique cells in the pancreas that produce, store and release insulin.

The antioxidant glutathione is thought to slow the aging process, according to a 1998 article in The Lancet journal. And the folate that asparagus provides works with B12 to prevent cognitive decline. A Tufts University study found that older adults with healthy levels of folate and B12 performed better during a test of response speed and mental flexibility than those with lower levels of folate and B12.

Yet another amazing thing about the antioxidant glutathione: it helps protect the skin from sun damage and pollution. A small 2014 study published in Clinical, Cosmetic, and Investigational Dermatology studied healthy adult women ages 30-50 who applied a glutathione lotion to half their faces and a placebo lotion to the other half for 10 weeks. The glutathione side saw increased moisture, suppressed wrinkle formation and smoother skin. It is unknown if eating glutathione-rich foods like asparagus would produce a similar effect.

Asparagus can act as a natural diuretic, according to a 2010 study published in the West Indian Medical Journal. This can help rid the body of excess salt and fluid, making it especially good for people suffering from edema and high blood pressure. It also helps flush out toxins in kidneys and prevent kidney stones. On the other hand, the National Institutes of Health recommends that people who are suffering from uric acid kidney stones should avoid asparagus.

Flores noted asparagus' significant amount of folate, which she said "is important for women of childbearing age to consume daily." Folate can decrease the risk of neural-tube defects in fetuses, so it is essential that mothers-to-be get enough of it.

"Asparagus is known to help stabilize digestion due to the high amount of fiber and protein that it contains," said Flores. "Both help move food through the gut and provide relief from discomfort during digestion."

According to The Ohio State University, asparagus contains inulin, a unique dietary fiber associated with improved digestion. Inulin is a prebiotic; it does not get broken down and digested until it reaches the large intestine. There, it nurtures bacteria known to improve nutrient absorption, decrease allergies and reduce the risk of colon cancer.

Antioxidants and anti-inflammatories, which are found in great quantities in asparagus, are typically associated with decreased risk of cancers. A 2016 review in the journal Nutrients stated that polysaccharides (carbohydrate molecules) found in asparagus helped inhibit dangerous liver cancer cell proliferation in animal studies. When injected with anti-cancer drugs directly into the tumor, scientists saw "markedly suppressed liver tumor growth as well as prolonged survival time … with little toxicity."

A group of phytonutrients called saponins are found in high qualities in asparagus. They have both fat-soluble and water-soluble components, meaning they can affect the body in more ways than some other phytonutrients can. They are known for their effects on cell membranes and immune response. Today, several animal studies have been done to learn more about how saponins can inhibit production inflammatory molecules and promote white blood cell activity. One such study, published in Biomedicine and Pharmacology in 2017, proposes that saponins from asparagus might be a helpful component in preventing secondary tumor formation. The study looked at the effect of saponins from asparagus being injected into mice for 56 days and saw an improvement in cellular immunity without the high allergic reactions typical in drugs used to prevent secondary tumors.

"There are no life-threatening side effects of eating too much asparagus," said Flores, "but there may be some uncomfortable side effects such as gas, and a noticeable smell to the urine."

It is also possible to have an asparagus allergy, in which case you should not eat it, she said. People who are allergic to other members of the lily family, such as onions, garlic, and chives, are more likely to be allergic to asparagus. Symptoms include a runny nose, hives, trouble breathing, and puffiness or swelling around the mouth and lips.

Why does asparagus make urine smell?

According to Smithsonian magazine, asparagus is the only food to contain the chemical asparagusic acid. When this aptly named chemical is digested, it breaks down into sulfur-containing compounds, which have a strong, unpleasant scent. They are also volatile, which means that they can vaporize and enter the air and your nose. Asparaguisic acid is not volatile, so asparagus itself doesn't smell.

In 2016, The BMJ medical journal published a study in which researchers examined data from The Nurses' Health Study, a large-scale study involving nearly 7,000 participants of European descent, to help determine if there is a genetic basis for smelling asparagusic acid. More than half of the participants could not smell it and researchers found that genetic variations near olfactory receptor genes was associated with the ability to detect the smell. The researchers suggested treatments could potentially be created to turn smellers into non-smellers and thereby increase the potential for eating healthy asparagus.

Whether you can smell it or not, there are no harmful effects to producing, or smelling, the odor in urine.

According to the Michigan Asparagus Advisory Board: