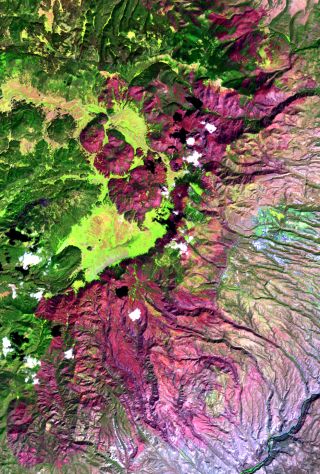 A satellite image of the 2011 Las Conchas Fire in New Mexico shows the burned areas in magenta and the unburned areas in green.
(Image: © Philip Dennison/MTBS)

Across the western United States, wildfires grew bigger and more frequent in the past 30 years, according to a new study that blames climate change and drought for the worsening flames.

"It's not just something that is localized to forest or grasslands or deserts," said lead study author Phil Dennison, a geographer at the University of Utah. "Every region in the West is experiencing an increase in fire. These fire trends are very consistent with everything we know about how climate change should impact fire in the West," Dennison told Live Science.

The number of fires jumped by seven per year since 1984, and fires burned an additional 90,000 acres (36,000 hectares) each year, according to the study, published online April 4 in the journal Geophysical Research Letters. [Yosemite Aflame: The Rim Fire in Photos]

Dennison and his co-authors aren't the first to note that Western wildfires are getting worse. But with so many different landscapes in the West, from alpine forests to inland deserts, the reasons underlying the trend have been hotly debated. Causes could include bark beetle infestation, fire suppression policies, severe droughts, global warming and population increases in fire-prone areas.

But because the bump in wildfires seen in the study is so widespread, Dennison thinks one main factor likely underlies the trend: climate change.

"This is over too short of a period to say this is definitely climate change, but it does point in the direction of changing climate having an impact on fire," he said.

Dennison and his co-authors analyzed satellite data from the Monitoring Trends in Burn Severity Project. This relatively new database goes back to 1984 and contains all fires that burned more 1,000 acres (400 hectares) in the United States. They examined nine "ecoregions" — such as the Rocky Mountains, the Southwest desert and the Southern plains — and some 6,800 fires.

Between 1984 and 2011, the increase in fire activity was greatest in regions that were also hit hard by drought, the researchers found. This includes the Rocky Mountains, Sierra Nevada and Arizona-New Mexico mountains; the Southwest desert in California, Nevada, Arizona, New Mexico and parts of Texas; and the Southern plains across western Texas, Oklahoma, Kansas and eastern Colorado.

"Most of these trends show strong correlations with drought-related conditions, which, to a large degree, agree with what we expect from climate change projections," said Max Moritz, a study co-author and fire specialist at the University of California-Berkeley Cooperative Extension.