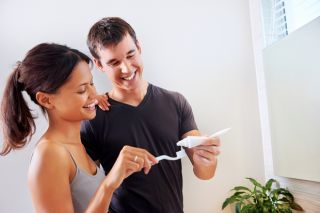 Dental plaque is a sticky, clear film that forms on teeth and between teeth, both above and below the gum line. Plaque should be removed regularly because it can cause dental problems.

Plaque forms all over the mouth, but it tends to accumulate in and around the molars' deep crevices, according to the Newcastle University School of Dental Sciences in England. Though it is mostly colorless, dental plaque can cause teeth to feel fuzzy or rough if it accumulates.

"Plaque makes the teeth feel rough and slimy," said Dr. Margaret Culotta-Norton, a dentist in Washington, D.C., and former president of the D.C. Dental Society. "It feels like the teeth have 'sweaters' on them."

Other symptoms include bad breath, red swollen gums and discoloration, Culotta-Norton said, adding that the highest at-risk groups are children, elderly adults and many who are financially unable to seek dental care.

According to Drs. Rita Chandki, Priyank Banthia and Ruchi Banthia, in an article in the Journal of Indian Society of Periodontology, dental plaque is so named because, if greatly accumulated, it can take on a yellowish color reminiscent of mucosal plaques caused by syphilis.

How does plaque form?

"Plaque is caused by allowing food and drink to remain on the teeth after eating, Culotta-Norton told Live Science.  "Insufficient brushing and flossing also cause the plaque to remain on the surface of the teeth, especially at the gum line."

Over time, without regular brushing, these acids begin to eat their way through tooth enamel, destroying it and causing tooth decay (cavities), according to the National Institute of Dental and Craniofacial Research (NIDCR). Tooth decay can lead to tooth abscesses. If the plaque develops on the tooth roots under the gum line, the acids can break down the bone supporting the tooth.

According to the NIDCR, dental plaque near the gum line can also lead to gingivitis, a mild form of gum disease that can eventually cause more serious periodontitis. In this case, the plaque produces toxins that irritate the gums, causing them to swell, bleed and become infected.

Dental plaque that remains on the teeth for several days calcifies and becomes a hard, dense substance called calculus or tartar. Tartar is difficult to remove and must be scraped off teeth by a dentist or dental hygienist, according to the Greater St. Louis Dental Hygienists' Association.

How to get rid of plaque

"Plaque will never go away completely, but it can be controlled with good oral hygiene and visits to the dentist," Culotta-Norton said. It is important to remove it regularly before the acid begins to cause tooth decay, the toxins begin to cause gum disease, and before it turns into tartar.

“Proper brushing for two minutes twice a day and flossing once per day are the best way to remove plaque,” she said. Furthermore, “electric toothbrushes have been proven to be most effective in removing plaque.” Brushing after every meal or snack as well as before bedtime helps prevent plaque buildup.

Teeth should get a professional dental cleaning every six months and a dental exam and X-rays once a year. During the cleaning, the dentist or dental hygienist will remove all traces of plaque and tartar from the mouth in a process known as “scaling.”

Eating a balanced diet with limited sugar and carbohydrates can help prevent dental plaque from building up, according to the World Sugar Research Organization. Limiting between-meal snacks can also help because the acid production escalates every time food is eaten.

The American Dental Association also notes that dentists may apply sealants — which are thin, protective plastic-like coatings — to the chewing surfaces of back molars, where plaque tends to be especially prevalent. Sealants are often applied to young children's teeth, but adults can benefit from them as well. Sealants can reduce tooth decay in schoolchildren by more than 70 percent, according to a 2000 report on oral health by the U.S. Surgeon General.