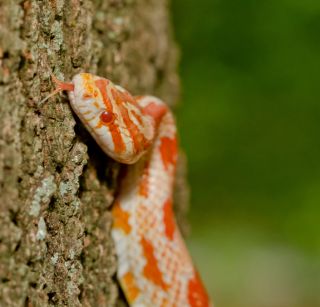 Corn snakes can climb trees and like to hide under rotting bark, logs, and rocks.
(Image: © Tim Nowak and Hamidreza Marvi.)

Corn snakes are nonvenomous snakes found primarily in the southeastern United States. They are medium-size snakes, brightly colored with individual patterns. Corn snakes are fairly calm and easy to care for. They are popular as pets. But watch out, corn snake owners — these elegant serpents are skilled at escaping from their homes.

There are a few different ideas about how the corn snake got its name. According to the Smithsonian National Zoological Park, corn snakes' belly markings look similar to the kernel pattern on Indian corn. The Animal Diversity Web (ADW), a database maintained by the Museum of Zoology at the University of Michigan, reports that the corn snake's name comes from the fact that it can often be found in corn and other crop fields, while Davidson College's Herps of North Carolina says the name stems from the fact that corn snakes often live in barns where rats come to feed on corn and other grains.

Corn snakes are closely related to rat snakes and are sometimes known as "red rat snakes." That name comes from their coloring, which is usually reddish-orange or orange-brown. Snakes at higher elevations tend to be browner, reports the Virginia Department of Game and Inland Fisheries.

Herpetologist Jeff Beane, collections manager of amphibians and reptiles at the North Carolina Museum of Natural Sciences, described corn snakes' back markings as "dark-margined red or brown mid-dorsal blotches and smaller lateral blotches on a ground color of red, orange, brown or gray." Their bellies are glossy white, boldly checkered with black. Sometimes, there are orange accents in their belly pattern, and they often have two black stripes under their tails.

Their heads are also distinctive, having what Beane described as a "spear-shaped blotch." They also usually have "dark vertical bars on the lips ... [their] iris is usually orange or red." Their pupils are round.

Corn snakes are the most commonly bred snake species in the United States, according to ADW. Commercial breeders of domesticated corn snakes have developed hundreds of variations, or morphs (or breeds), through selective breeding.

According to the Ratsnake Foundation Herpetological Society, morphs include:

Okeetee corn snake: This breed was originally bred from corn snakes caught in South Carolina. They have deep-red saddles with jet-black borders.

Snow corn snake: Another type of amelanistic snake, members of this morph are pink and yellow. Their eyes are pink with darker pink pupils.

Black corn snake: These are a type of anerythristic corn snakes. Anerythrism is the absence of the pigment erythrin, which produces reds and yellows. These snakes are mostly gray and black.

Lavender corn snake: This morph was first produced in the 1980s, as the result of breeding a snow corn snake with a wild-caught female. These snakes are dark grayish to bright pastel lavender.

Sadly, corn snakes are often mistaken for copperheads and killed in the wild, according to the Virginia Department of Game and Inland Fisheries. But according to Beane, "These species do not look at all alike to anyone familiar with snakes." He recommends that people "get familiar with them" in order to learn how to tell them apart.

People can tell the species apart by the markings. Copperheads have hourglass markings, whereas corn snakes' markings are blotchy and random. Copperheads also do not have the black-and-white checked belly. And as Beane said, "If you don't plan on handling a snake, you don't need to know what it is — just leave it alone."

Corn snakes have a "typically gentle disposition, though temperament varies," he said. If threatened, they may vibrate their tails.

How big do corn snakes get?

Corn snakes are slender and range from 18 to 44 inches (45 to 112 centimeters), with the record at 72 inches (1.8 meters), according to the Florida Museum of Natural History.

According to Beane, corn snakes are probably most common in the longleaf pine forests and flat woods of the southeastern United States. They range, however, "from the New Jersey Pine Barrens south to the Florida Keys and west to the Mississippi River." He also pointed out that a subspecies known as the Great Plains rat snake can be found from the Mississippi River to eastern Utah.

Corn snakes are active both day and night, but tend to be nocturnal in hot weather. They enjoy a "wide range of habitats," Beane said. "Usually there's at least some forest present, but [they] also occur in grasslands and other habitats." In cold climates, corn snakes seek shelter in stump holes, mammal burrows or other subterranean refuges, Beane said. During the warmer months, corn snakes slither into abandoned buildings, invade rodents' burrows looking for prey, and sometimes even climb trees, according to the Smithsonian Zoo.

They enjoy manmade habitats, too, such as woodlots, abandoned buildings and barns. Beane said that corn snakes "often seek refuge under sheltering objects such as logs, boards and sheet metal."

What do corn snakes eat?

"Juveniles feed mostly on lizards and frogs (especially tree frogs), but adults eat mostly mammals and birds," Beane said. Rodents are corn snakes' favorite dinner. Not being venomous, these snakes don't just bite their prey to kill it — they constrict it. First, they bite the prey to get a firm grip on it, and then they quickly wrap their muscular bodies around the victim in tight coils. Corn snakes squeeze their victims tightly until they suffocate and die. Then, corn snakes swallow their dinner whole, usually head first, reports the Smithsonian Zoo. Occasionally, they will swallow small prey alive.

According to Beane, corn snakes mate in both the spring and the fall. "Males may engage in ritual combat (body-shoving contests) when two or more meet in the presence of a receptive female," he said. Corn snakes are oviparous, meaning that the mothers lay eggs. According to the ADW, the mother pops out 10 to 30 eggs any time from May to July. She lays them in rotting stumps, and in piles of decaying vegetation or other places where there will be enough heat and humidity for the eggs to incubate. Then, she slithers off, never to see the babies.

The eggs gestate for about two months. When born, babies are 10 to 15 inches (25 to 38 cm) long and are patterned like adults, according to Herps of North Carolina. Their blotches, however, are much darker, being brown to nearly black on a grey or light-orange body.

According to the Florida Museum of Natural History, they can live up to 22 years in captivity, though their life expectancy in the wild is less.

Historically, corn snakes were included in the genus Elaphe. However, in 2002, genetic research led U. Utiger and others to determine that North American rat snakes were distinct from Old World snakes, which are also regarded as Elaphe. In the Russian Journal of Herpetology, they proposed putting rat snakes north of Mexico, as well as corn snakes, into the genus Pantherophis.

While the Integrated Taxonomic Information System (ITIS) — a partnership of several agencies in the United States and abroad — has not adopted the new taxonomy, other organizations, such as the Animal Diversity Web and the International Union for Conservation of Nature (IUCN), have. The IUCN states, "We retain this species in Pantherophis, following Utiger et al. (2002) pending further information on the relationships of these taxa."

The taxonomy of corn snakes is:

The IUCN lists corn snakes as "Least Concern" because of their large population size and distribution.