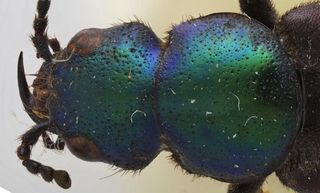 A brightly colored beetle collected by Charles Darwin more than 180 years ago has been identified as a new species after hiding in museum storage for decades.

The discovery of Darwinilus sedarisi — whose scientific epithet honors both Charles Darwin and the writer David Sedaris — was announced Wednesday (Feb. 12) to coincide with the 205th anniversary of Darwin's birthday.

The South American beetle specimen had been considered lost for decades in a collection at the Natural History of Museum in London. It only resurfaced a few years ago when a scientist studying tropical beetles from the New World stumbled upon the insect. [StarStruck: Species Named After Celebrities]

"I received on loan several insects from the Museum in London, and to my surprise I realized that one of them was collected by Darwin," Stylianos Chatzimanolis, an entomologist at the University of Tennessee at Chattanooga, said in a statement. "Finding a new species is always exciting, finding one collected by Darwin is truly amazing."

This rediscovered male insect was among the specimens that Darwin — an avid beetle collector — picked up in 1832 at Bahía Blanca in Argentina, a city about 400 miles (640 km) southwest of Buenos Aires, early into his five-year journey aboard the HMS Beagle. Darwin's observations during that fateful trip led to his theory of evolution by natural selection.

Only one other specimen of Darwinilus sedarisi has ever been collected in the wild — another male found in Río Cuarto, a city in Argentina's province of Córdoba, sometime before 1935. Chatzimanolis did not find any other members of the species after scouring the insect stockpiles at European and North American museums, but hopes that additional members might come to light either in the wild or museum collections.

"Much of the area between Bahía Blanca and Río Cuarto has been converted into agricultural fields, and it is questionable if that is a suitable habitat for the species," Chatzimanolis wrote in his description of the species. "One of course hopes that a newly described species is not already extinct."

The beetle has sawtoothed antennas and a hexagonal-shaped head that's metallic green in color. Darwinilus represents a new genus of rove beetles, the largest family of beetles that includes more than 57,000 known species.

As for the species name, sedarisi, Chatzimanolis decided to honor author and humorist David Sedaris, "as an appreciation for his fascination with the natural world."

"I spent many hours listening to Mr. Sedaris' audiobooks while preparing the specimens and the figures for this and other manuscripts," Chatzimanolis wrote. Among Sedaris' many titles is "Squirrel Seeks Chipmunk: A Modest Bestiary" (Little, Brown and Company, 2010), a book of fables starring anthropomorphized animals.

A full description of Darwinilus sedarisi is in the journal ZooKeys.