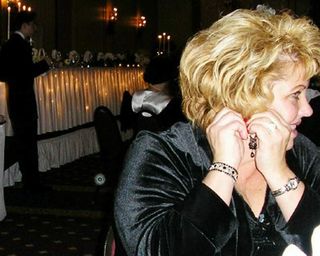 A small, mysterious glowing orb appears behind a woman at a wedding reception. The orb was not seen at the time and only discovered after the photo was developed.
(Image: © Benjamin Radford)

One thing that ghosts , Bigfoot , and UFOs have in common is a lack of hard evidence for their existence. Many people report seeing these phenomena, though sightings are essentially stories, not proof.

According to many "ghost experts," just about anyone can find evidence of ghosts using a device found in nearly every home: a camera. Ghost stories and sightings are fine, but what can we make of images claimed to be actual photographs of dead spirits?

Last year an exhibition of spirit photography was held at the Metropolitan Museum of Art in New York City. Several of the pictures on display were created by Boston photographer William H. Mumler, who first claimed to have captured ghosts on film. Mumler produced many "spirit photographs" in the latter half of the 1800s, depicting faint, ghostly images in otherwise normal portraits. This caused a sensation and convinced many people with his seemingly excellent proof of ghosts.

Yet there was more to Mumler's photographic proof of life after death than met the eye; he was exposed as a hoaxer when some of the "ghosts" he had photographed were seen very much alive, living and working in Boston. In the process of his work, Mumler had simply stumbled across a crude method of double exposure, and hatched a plan to make a fortune with his fakes.

The clear images of ghosts and dead souls depicted by Mumler are long gone. Despite dramatically improved optical equipment and cameras over the past century, most "ghost photos" fall into two categories: 1) hazy, indistinct shapes that can be interpreted as a human form; and 2) "mysterious" glowing white blobs called orbs.

Both can be easily (and accidentally) created by photographic error, and the latter are by far the most common. Books, television shows, and Web sites about ghosts often include photographs of orbs that investigators (or just ordinary people) find scary, amazing, or simply puzzling. Orb photos are essentially Rorschach cards, though the forms are usually white and round instead of black and blobby. The interpretations of both, however, reveal much about how the viewer sees the world.

Orbs may take a variety of forms. There is not one blanket cause for all orbs; many things can create the phenomena, including insects and dust close to the camera lens.

In a series of experiments, I was able to create orb photos under a wide range of circumstances. Orbs can be found in the most un-spooky of settings, and are actually fairly common in daily, amateur photography. They are usually only noticed when a person is actively looking for them as evidence of ghosts. For example, this photo is one of several images I snapped at a New Year's wedding reception that later revealed odd glowing orbs. Proof of spectral party crashers, or a simple photographic trick of light?

The easiest way to create an orb image is to take a flash photograph outdoors on a rainy night. The flash will reflect off the individual droplets and appear as white, floating orbs (the effect is most pronounced in a light rain, though even a little moisture in the air can create mysterious orbs). As researcher Joe Nickell notes in his book Camera Clues , unnoticed shiny surfaces are also common sources of orbs. (As well, flashes reflecting camera straps can produce other ghostly photo effects.)

During one investigation I conducted several years ago at Fort George ("Canada's most haunted place," in Niagara-on-the-Lake, Ontario), I examined a large, wooden soldiers' barracks where ghosts and orbs had been reported. I took several flash photographs of the area, and I noticed that the building (essentially a barn-like structure) was quite dusty. As a television crew interviewed some ghost hunters, I noticed one orb, photographed it, and wondered what it might be ( image).

It hovered about chest-high and did not move at all, suggesting that it was not an insect nor a dust particle; instead it seemed supernaturally suspended in the air. It was several feet away from the nearest post, wall, or other visible means of support. The phenomenon was very strange.

I showed the image to one of the ghost hunters, who seemed pleased that I had captured what was obviously a ghost orb.

Not content to simply declare my orb a sure sign of the supernatural, a fellow investigator and I searched even harder for a solution.

Sure enough, closer investigation revealed that the orb was in fact a tiny piece of dust or lint that clung to the remnants of a spider web ( image). It was a very unusual place for a web, and had I not traced the long, nearly-invisible line to its arachnid anchor, I would have rejected a web as an explanation. But it was a very long strand and just far enough away from the walkway that all but the tallest passersby would not walk through it. The dust mote was very difficult to see, and only apparent when a dark color appeared behind it for contrast, or when caught in a flash photograph.

Had an amateur ghost-hunter spent a few minutes taking flash photos of that room at night, the dust would likely have appeared as an orb--and its true cause almost certainly overlooked as an explanation.

Orbs seem otherworldly because they are almost always invisible to the naked eye and go unnoticed until the photo is examined, later revealing the presence of a ghostly, unnatural, glowing object, sometimes appearing over or around an unsuspecting person. To those unaware of scientific and optical explanations, it is no wonder that orbs spook people (as Mumler's photos did 120 years ago). Most ghost investigators will admit that at least some orb photos are of ordinary phenomena. Still, they insist, there must be some orbs that defy rational explanation. None have yet been found. Of course it's possible that ghosts and spirits do exist and can be photographed. But if so, where's the proof? And why do images of ghosts look exactly like images of photographic errors?

Ghost enthusiasts are satisfied with hazy images and orbs, but this will never convince skeptics and scientists. So what would be good photographic proof of ghosts?

An authentic photograph of anyone born before the invention of photography would be a good start: Benjamin Franklin, William Shakespeare, or any of thousands of other people for whom we have a good record of their likeness but no photograph. Just one such photo would be more convincing than a thousand glowing blobs. Unfortunately, all the ghost photos offered so far are indistinguishable from intentional fakes and optical mistakes. Maybe next year.

Benjamin Radford is an investigator with the Committee for the Scientific Investigation of Claims of the Paranormal and author or co-author of three books .