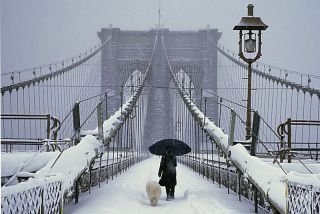 A woman walks her dog in the snow on the Brooklyn Bridge.
(Image: © Zhuang Mu, Shutterstock)

When frigid temperatures set much of the country shivering last week, pundits took the opportunity to scoff at the concept of climate change.

"This very expensive GLOBAL WARMING bull**** has got to stop," Donald Trump tweeted. "Our planet is freezing, record low temps, and our GW scientists are stuck in ice."

The final comment referred to an Antarctic research vessel that got stuck in ice driven by high winds in late December.

Researchers rushed to point out that despite the short-term cold, winters have been getting warmer, on average (and that Australia is currently in the grips of a brutal heat wave). But the weather-related denial of global warming is a pernicious pattern that troubles climate scientists: When the weather is hot, the public believes more in climate change. When it's cold, people shrug off their concerns.

"It's striking that society has spent so much time and effort educating people about this issue, yet people's beliefs can shift so easily," said Lisa Zaval, a graduate student in psychology at Columbia University in New York. [8 Ways Global Warming is Already Changing the World]

The root of the problem

Zaval is the lead author of a new study that delves into why the weather so easily sways people's climate beliefs. It turns out that when making decisions, people tend to lean on the most accessible information available — even when that information is not particularly accurate or relevant.

But belief shifts with the seasons. In June 2013, after a cold winter in the United States, 63 percent of Americans believed in global warming, according to a survey by the National Surveys on Energy and Environment (NSEE). In the fall before that brutal winter, 67 percent believed.

A number of studies have looked at climate change opinion and found that the weather (or simply a person's perception of the weather) influences how concerned people are about a warming world, Zaval told LiveScience. She and her colleagues wanted to find out why.

To do so, they conducted a series of surveys. At first, they thought the phrasing of the question might make a difference. People might be more swayed by the weather if asked about "global warming," which triggers thoughts of temperature, versus the more neutral "climate change."

A study of 686 people given identical surveys with only those terms swapped out revealed no differences, however. The warmer the day, the more likely the respondents were to be concerned about both "climate change" and "global warming."

Perhaps the effect is caused by a lack of knowledge, the researchers reasoned. If people mistakenly believe weather and climate are the same thing, they might be unduly swayed by the local forecast. To test the idea, Zaval and her colleagues gave 330 people surveys on their climate change beliefs. Half of the surveys included a paragraph on the difference between short-term weather and long-term climate change.

Unfortunately, even educating respondents made no difference. The current weather continued to influence their climate concerns. [Weather vs. Climate: Test Yourself]

Finally, the researchers tested a third hypothesis. What if today's weather makes similar days more accessible in people's memory? If it's hot and humid, for example, someone might be primed to recall other hot, humid days. If it's cold and blustery, perhaps sunshine and heat are hard to bring to mind.

The researchers conducted another survey of 300 more people. This time, participants completed sentence-scrambling tasks before answering the climate questions. The sentences they were asked to unscramble either had to do with heat, cold or a neutral topic.

The respondents who focused on heat-related sentences before thinking about climate change became more concerned about global warming, the researchers found.

A further series of surveys cemented the findings. People who believed that the current weather was unusually warm also believed that a greater percentage of days over the previous year had been hotter than average, compared with people who thought it was cool outside.

This priming effect could explain why the current weather is so influential. As people consider their own experience while mulling over their climate change concerns, their memories return weather similar to that given day's. In essence, a hotter day makes all the days in the past seem hotter, too. A cooler day makes every other day feel a bit chillier.

The researchers aren't sure whether this local weather effect extends across the political spectrum (conservatives are less likely than liberals to believe that climate change is a problem). Nor are they sure how to deal with people's biases, given that public opinion shapes public policy on climate change.

"Unfortunately, we have not found a method to combat this effect," Zaval said.

The researchers reported their findings Sunday (Jan. 12) in the journal Nature Climate Change.