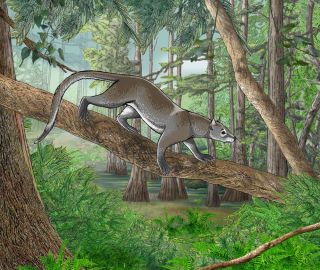 Lions, tigers, bears and even loyal pups and playful kitties all come from the same line of carnivorous mammals, a lineage whose origins are lost in time. Now, scientists have discovered one of the earliest ancestors of all modern carnivores in Belgium.

The new species, Dormaalocyon latouri, was a 2-pound (1 kilogram) tree-dweller that likely fed on even smaller mammals and insects.

"It wasn't frightening. It wasn't dreadful," said study researcher Floréal Solé, a paleontologist at the Royal Belgian Institute of Natural Sciences in Brussels. What it was, Solé said, is a clue to the beginnings of today's toothy beasts. [In Photos: Mammals Through Time]

"It is one of the oldest carnivorous mammals which is related to present-day carnivores," Solé told LiveScience.

The carnivoraforms, as they're known, appear widespread during the Eocene, but without earlier fossils, paleontologists are unsure about their origins. Solé and his colleagues examined fossils from the very earliest Eocene, about 56 million years ago, from Dormaal, Belgium, east of Brussels.

The site was first discovered in the 1880s and has yielded 40 species of mammals over the years. Richard Smith, also of the Royal Belgian Institute of Natural Sciences, and a colleague of Solé's, has sifted nearly 14,000 teeth from the soil in Dormaal.

Among them are 280 new specimens of teeth from a species hinted at previously from only two molars. With the new information from the teeth (including baby teeth from juveniles) and some ankle bones, Solé, Smith and their colleagues described this species today (Jan. 6) in the Journal of Vertebrate Paleontology.

The ankle bone fossils reveal that Dormaalocyon lived an arboreal life, scampering through the trees in what was then a humid, subtropical forest, the researchers report. It likely looked like something of a cross between a tiny panther and a squirrel, with a long tail and a catlike snout.

The study confirms previous work suggesting that carnivores emerged during the Paleocene, before Dormaalocyon's time, said Gregg Gunnell, the director of the division of fossil primates at the Duke Lemur Center in North Carolina, who was not involved in the research.

"It really shows that there is a lot of diversity very early in the Eocene, and we have absolutely no idea where it came from," Gunnell told LiveScience.

Part of the challenge of uncovering carnivore history is that, on the whole, meat-eating mammals aren't that common, Gunnell said — there are many more herbivores and omnivores on the planet and in the fossil record. In addition, Solé said, fossils from Europe, which appears to be an important stop for, and potentially the origin of, carnivore evolution and spread, are rarer than fossils from North America.

The geographical origin of the carnivoraforms remains mysterious, however. One theory holds they originated in North America and spread to Europe; the relationships of the fossils in Dormaal seem to suggest something more complex, Solé said. It's possible that carnivoraforms began in Asia and made it to North America through Europe.

With the current fossil record, however, it's just not possible to say for sure. Solé and his colleagues will soon publish a paper on a new fossil site in France from the late Paleocene — and a new carnivorous mammal found there — that may hold answers.

"We need to find some Paleocene deposits that produce some kind of ancestors of these carnivoraforms," Gunnell said. "We're lacking a big chunk of information."