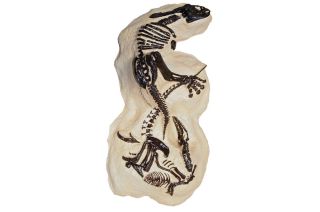 An artist's model of the Montana Dueling Dinosaurs based on geographical placement of the fossils.
(Image: © Image courtesy of Black Hills Institute of Geological Research Inc. and Katie Busch, Owner/Partner CK Preparations))

NEW YORK — Two fossilized dinosaurs discovered side-by-side in the Montana badlands failed to sell when they went under the hammer in here Tuesday (Nov. 19), despite projections that they would break auction records.

Bonhams auction house, which handled the sale of the so-called Dueling Dinosaurs, had estimated the bones would sell for between $7 million $9 million. Bidding started at $3 million and stopped at $5.5 million, however, failing to meet the auction house's undisclosed reserve.

So for now at least, the famed T. rex called Sue remains the most expensive fossil specimen to be sold at public auction. The Field Museum in Chicago bought that dinosaur in 1997 for $8.36 million, blowing away expectations at the time that it would sell for around $1 million. [See Images of the Dueling Dinosaur Fossils]

Auction house officials said they are hopeful the dinosaur duo will find a home and are now entering into negotiations with interested U.S. institutions.

"The story isn't over," said Thomas Lindgren, co-consulting director of the natural history department at Bonhams in Los Angeles, who put together today's natural history auction in New York, which drew a crowd prospective buyers, curious onlookers and reporters.

"Behind the scenes, before the sale occurred today, I've had museums mention that they have difficulty coming up with funds this quickly, but should the lot not sell — which of course occurred — they want us to be in negotiations immediately," Lindgren said during a press conference after the sale. "I'm very confident we're going to find a scientific home for these dinosaurs."

Locked in the same chunk of earth, the two dinosaurs were being auctioned off as a single specimen, still encased in dirt and their plaster field jackets. Some paleontologists had expressed fears ahead of the auction that the dinosaurs could be lost to science should they end up in the hands of a private collector who has no desire to loan or donate them to a public institution.

Lindgren said he had been guiding the sale toward the institutions and donors that would house the fossils in a public collection, adding that he wasn't thrilled with the idea that they could "disappear to a private individual who would not make them available."

Fossil hunters uncovered the massive herbivore and the meat-eater on a ranch in the Montana badlands in 2006. The beasts' poses suggest they were engaged in mortal combat, and hence the nickname of the Dueling Dinosaurs.

Billed as the most complete dinosaur fossils from North America's Late Cretaceous rocks, the Dueling Dinosaurs are extremely well articulated and bits of skin even cling to the sand that surrounds the bones.

The creatures in question are a ceratopsid — perhaps a new species of Triceratops — and a tyrannosaurid — possibly a Nanotyrannus lancensis, according to Bonhams.

Researchers are often loathe to put a price tag on their study specimens, and some objected to the sale on scientific grounds, arguing that the fossils' true importance, identity and death saga (i.e., whether they represent fierce combatants or perhaps a pair of unlucky strangers washed away in a flood) cannot be known until the bones are examined in peer-reviewed studies.

The fossils previously had been offered to museums in the United States, but they were turned down because of the prohibitive price, by some accounts. Hans-Dieter Sues, curator of vertebrate paleontology at the Smithsonian's National Museum of Natural History, told LiveScience earlier this month that his institution was offered the fossils for $15 million.

Earlier this week, Bonhams ran into some trouble with other lots that were supposed to be sold at today's auction. The San Diego Museum of Natural History withdrew a dozen fossils from the sale after paleontologists objected to the possibility that study specimens that have been in the public trust for nearly 100 years could be turned over to private hands.