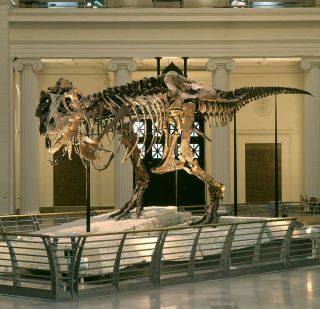 Almost a year ago, headlines proclaiming the sale of a largely complete T. rex-like dinosaur sparked an international custody battle that featured a confrontation at a public auction, a federal seizure of the fossils, charges related to smuggling against Eric Prokopi, the man who attempted to sell them — and, finally, his guilty plea.

This case appears to be winding down. Prokopi is awaiting sentencing, and, during a ceremony in New York City on Monday (May 6), the fossils will be returned to Mongolia — the country from which Prokopi admitted he took the ill-gotten fossils.

This is not the first time a fight over a prize dinosaur grabbed national attention and was followed by a criminal case.

More than 20 years ago, a team led by Peter Larson of the Black Hills Institute of Geological Research discovered and excavated what was at the time the largest and most complete Tyrannosaurus rex specimen ever found. The dinosaur, named Sue after the woman who first spotted its fossils, became the focus of an ownership dispute, which caught the attention of federal prosecutors. [Image Gallery: The Life of Tyrannosaurus Rex]

Sue's story ended at an auction in 1997, where the dinosaur sold for a landmark $8.36 million.

While the two cases share some obvious similarities, Larson expresses no sympathy for Prokopi, the fossil hunter and dealer at the center of the current case, describing it as "something very different from the Sue case."

Sue and Larson's story began in South Dakota in August 1990, when fossil hunter Sue Hendrickson discovered the T. rex in a cliff on a ranch on the Cheyenne River Sioux reservation.

An ownership dispute involving the institute, the rancher and the tribe arose. This caught the attention of the U.S. Attorney's office in South Dakota, which was already investigating allegations the institute had taken fossils from public lands. The National Guard carted Sue away from the Black Hills Institute in Hill City, S.D., prompting an outcry from residents of the town, where the institute planned to establish a museum displaying the dinosaur, according to an account in Steve Fiffer's "Tyrannosaurus Sue" (W.H. Freeman and Company, 2000).

The feds later slapped Larson, his colleagues and the institute with an array of charges related to collecting and selling fossils. None of the charges concerned Sue, and only a handful resulted in convictions. [Image Gallery: Amazing Dinosaur Fossils]

Larson pleaded not guilty, but was convicted of two felonies for customs' violations for failing to report cash and traveler's checks, as well as two misdemeanors, for which he received a two-year prison term. He has since returned to paleontology and the helm of the Black Hills Institute. Larson discusses the legal case and the discovery of Sue and other T. rex specimens in the book "Rex Appeal" (Invisible Cities Press, 2004), co-authored with Kristin Donnan.

In 1997, the auction house Sotheby's sold Sue at a public auction. The sale was unprecedented, and an article in The New York Times contained speculation the specimen would fetch "upward of $1 million." In fact, the dinosaur sold for a total of $8.36 million to The Field Museum in Chicago.

A Mongolian dinosaur in America

Two decades later, Prokopi hoped to capitalize on the high prices that a prehistoric predator could attract. He imported rough, fossilized remains of a Tarbosaurus bataar from a dealer in England, prepared and mounted them. He placed the finished, 8-foot-tall and 24-foot-long (2.4 meters by 7.3 meters) Tarbosaurus bataar with Heritage Auctions for an auction scheduled to occur on May 20 last year. (Tarbosaurus was an Asian relative of the North American T. rex.)

News of the sale sparked protest from the Mongolian President, Elbegdorj Tsakhia,who said the specimen had likely been taken illegally from his country, whose laws designate all fossils as state property. Paleontologists supported this claim, saying that all nearly complete Tarbosaurus specimens have been recovered from a rock formation in Mongolia's share of the Gobi Desert. Federal prosecutors seized the Tarbosaurus, Prokopi fought to keep the dinosaur, and prosecutors charged him with crimes related to smuggling the Tarbosaurus and other fossils into the country.

"If you are exporting from a certain country, you should know the laws," Larson said. "It is just a standard thing everybody should do."

Although Mongolian regulations do not allow for the export of fossils excavated within the country's borders, fossils known to come from Mongolia began appearing on the market in the United States at least 10 years ago, Larson said.

In December, Prokopi pleaded guilty to charges related to fossil smuggling. The plea should help stop the plundering of Mongolian fossil sites, Larson said. "And that's a good thing."

These smuggled fossils arrive without crucial information about where they were found, creating problems if paleontologists want to study the remains. For example, researchers, including Larson, disagree on the identity of a small dinosaur sold to an American collector without a known origin.

If excavated in China, the dinosaur may be a miniature ancestor to T. rex and Tarbosaurus, one side argues. Meanwhile, Larson and others say these fossils are more likely to represent a young Tarbosaurus from Mongolia.

"The scientific conclusions are completely different depending on where it is from," Larson said.

In a statement Prokopi released in June, he described federal prosecutors' involvement as an effort "to please a foreign government out for a political trophy." Later, in an interview for The New Yorker magazine conducted after his plea, Prokopi emphasized how common Tarbosaurus fossils are and suggested that the finds were exported from Mongolia with the sanction of that country's officials, in spite of its law.

Prokopi addresses the hostile response that he said news of the Tarbosaurus' sale provoked, writing in his statement: "Do people really think everything they see in a museum was found and prepared by the people that work there? The truth is many spectacular finds in paleontology have been privately funded."

Although he works in the fossil business, Larson straddles the divide to some degree, collaborating with academic paleontologists on research and authoring scientific publications.

"I am a capitalist, too," he said. "I think it's very important. People need to make a living. [But] they need to do it legally, whether they agree with the law or not. If not, it hurts everybody. It hurts the science, it hurts the public who are cheated from not being able to see the specimen.

"[The fossils] deserve respect. They are part of the history of life on the planet, and they are not just something to tear apart because you can," he said.

Editor's Note: This story has been updated. An earlier version of this story mischaracterized Prokopi's guilty plea.