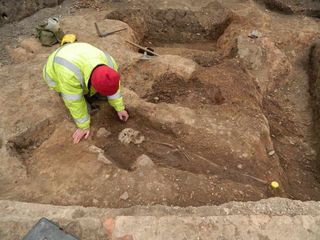 Hidden beneath a parking lot in Leicester, England, archaeologists have discovered a 1,700-year-old Roman cemetery that seemed to show no religious bias.

The new discovery, found at the junction of Newarke and Oxford Streets, includes numerous burials and skeletal remains from 13 individuals, both male and female of various ages. The cemetery is estimated to date back to around A.D. 300, according to University of Leicester archaeologists who led the dig.

"We have literally only just finished the excavation and the finds are currently in the process of being cleaned and catalogued so that they can then be analyzed by the various specialists," John Thomas, archaeological project officer, told LiveScience in an email. [See Images of the Ancient Roman Cemetery]

Parking lots seem to be great places to look for bones these days. In February, archaeologists announced that bones excavated from underneath a parking lot in Leicester, "beyond reasonable doubt," belong to the lost and vilified English king Richard III. More recently, the skeletal remains of a medieval knight and possibly his family crypt were unearthed from beneath a parking lot in Scotland.

Previous to the new discovery, scientists had excavated burials on Newarke Street, located to the east and north of the present site where the Roman cemetery was uncovered; these burials seemed to follow Christian traditions, in which the bodies were buried in a supine position, facing east with little or no goods buried alongside them, the researchers said.

"Unusually the 13 burials found during the recent excavations, of mixed age and sex, displayed a variety of burial traditions, including east to west and north to south-oriented graves," said Thomas, "many with personal items such as finger rings, hairpins, buckles and hob-nailed shoes."

For instance, in paganlike tradition one grave was facing north-south with the body positioned on its side in a semi-fetal position. The head had been removed and placed near the feet alongside two pottery jars, likely for offerings for the journey to the afterlife, Thomas said. "This would seem to be a very pagan burial," he said.

Nearby was a very Christian burial in which the individual was facing east and wearing a polished finger ring made of jet on the left hand. The design etched onto the ring, "IX," may have been an artistic design or could represent an early Christian symbol taken from the initials of Jesus Christ in Greek, known as Iota-Chi, or IX. "If so this would represent rare evidence for a personal statement of belief from this period," Thomas said in a statement.

From the mix of burial types, Thomas said it's possible "that the cemetery catered for a range of beliefs that would have been important to people living in Leicester at this time."

Archaeologists also discovered a 17th-century ditch running alongside Newarke Street, something that would have been part of the town's defenses during the English Civil War.

The project is ongoing and the archaeologists and other scientists will analyze the human bones to determine age, sex and the likely cause of death, Thomas wrote.

"It is possible that study of the bones will also enlighten us to patterns in the individuals' diet, and wear and tear on the bones may shed light on their lifestyle or the stress put on their bodies through work," Thomas wrote. "We have also taken soil samples from the stomach area of the bodies to look for gut parasites."