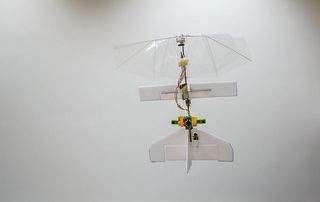 The DelFly Explorer has a stereo vision system that allows it to autonomously avoid obstacles in flight.
(Image: © Delft University of Technology)

A small drone that resembles a robotic dragonfly is the first of its kind to be able to flap its wings and dodge obstacles midflight without a human operator at the controls.

Engineers at Delft University of Technology in the Netherlands developed the small drone equipped with transparent wings and a special vision system that enables it to perceive objects in its path. The so-called DelFly Explorer is a Micro Air Vehicle, which is a class of small, insectlike aerial drones that are used for research, commercial, military and commercial purposes.

"The unique thing about the DelFly Explorer is that it can fly all by itself," de Croon said in a video about the drone. "We just plug in the battery, it takes off, it flies around, it avoids obstacles, keeps its height, and it can explore unknown environments." [9 Totally Cool Uses for Drones]

The ultra-lightweight DelFly Explorer weighs only 0.7 ounces (20 grams), which is equivalent to just a few sheets of paper. A binocular vision system, consisting of two cameras and a tiny onboard computer, helps the drone detect potential obstacles, in much the same way that human brains process images seen with their eyes.

"We've developed extremely efficient software that processes the images from the cameras and determines distances to obstacles in the environment," de Croon said. "It goes sufficiently fast to work onboard in real-time, so that [the] DelFly can avoid obstacles."

If the DelFly detects an object in its path, it will start circling around until its onboard cameras no longer see the obstacle, before proceeding in that direction. This capability enables the DelFly to explore unknown spaces without the assistance of a human operator.

The DelFly is also able to take off on its own, and maintain its height in the air. Currently, the battery allows the drone to fly around for approximately nine minutes, according to engineers at Delft. Other larger drones can fly autonomously and avoid obstacles, but the DelFly Explorer is more than 50 times lighter than most of these systems, they added.

The technology behind the DelFly Explorer could find myriad applications in commercial, military or even recreational settings.

"We think about a DelFly flying in a factory, inspecting pipelines or something like that," de Croon said. "But we also think about a DelFly flying over a crowd of people during a concert, streaming live images to a screen. Or, even about crazy stuff, like an attraction [or amusement] park, where the DelFly is a small elf searching for its partner. The DelFly Explorer is a big step toward realizing such applications."