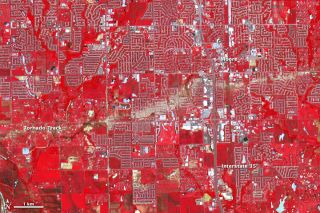 The damage scar left by the EF5 tornado that struck Moore, Okla., on May 20, 2013, as seen by the Advanced Spaceborne Thermal Emission and Reflection Radiometer (ASTER) on NASA's Terra satellite on June 2, 2013.
(Image: © NASA Earth Observatory image created by Robert Simmon, using data provided courtesy of NASA/GSFC/METI/ERSDAC/JAROS, and the U.S./Japan ASTER Science Team)

SAN FRANCISCO — The trail of twisted metal and torn roofs left behind by massive twisters is growing longer and wider, a sign that tornadoes may be growing stronger, climate scientist James Elsner said here Tuesday (Dec. 10) at the annual meeting of the American Geophysical Union.

Beginning in 2000, tornado intensity — as measured by a twister's damage path — started rising sharply, said Elsner, of Florida State University. "I'm not saying this is climate change, but I do think there is a climate effect," he said. "I do think you can connect the dots."

Devastating tornado outbreaks in recent years, such as the massive storm that injured hundreds in Moore, Okla., this summer, have focused attention on whether climate change is altering tornado frequency and strength. Just last week, a heated debate played out in an op-ed on LiveScience and the New York Times over whether tornado-tracking data could answer these questions. One scientist claimed the data show twister numbers are dropping, but tornado experts said changes over time in how weather officials assess tornado size and damage make it difficult to look for climate patterns. [Gallery: Moore Tornado Damage]

But  Elsner said tornado data are good enough to reveal whether global warming is altering twisters. "I've been working with hurricane tracking data for 25 years, and tornado tracking data is better," Elsner said. "We have the tools, we have the data to answer the question. Statisticians drool when they see stuff like this."

"I think we're at the point where we were 30 years ago with hurricanes. People were skeptical about the connection between hurricane and climate, but now they don't even blink," he said.

Elsner is the first to admit he doesn't have the climate answers, but he said his early results are a step in the right direction: finding a way to solve the data conundrum.

Elsner's solution was to drop the human factor. Instead, he looked at wind speed and the size of the damage path (its length and width) to gauge whether tornado intensity has changed since 1994. (The United States has been almost completely covered by Doppler weather radar since 1994.) Using the damage path to gauge intensity avoids problems such as analyzing tornado strength via the Fujita and Enhanced Fujita scales, which are based on observations by weather service officials, he said.

Elsner analyzed damage paths and wind speeds using a statistical model. The result: a sharp upward spike starting in 2000. He also looked at earlier data, since the 1970s, which showed a much slower rise.

Puzzling out how climate change alters tornados is the big next step, Elsner said. One way this could happen is by adding moisture (via humidity) to fuel storms in Tornado Alley, the storm belt where tornadoes spin up in the United States. Warmer air holds more moisture. But Elsner said it was also important to track tornadoes in Canada, because there are hints that big ridges and troughs in the jet stream's powerful winds could be triggering more tornadoes up north, and fewer in the United States.

"We really need a North American data set to answer questions about frequency," he said.