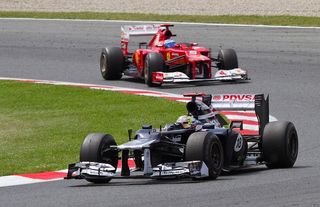 Pastor Maldonado of Williams Renault F1 team racing at the race of Formula One Spanish Grand Prix at Catalunya circuit, on May 13, 2012 in Barcelona, Spain.
(Image: © Natursports / Shutterstock.com)

SAN FRANCISCO — Formula 1 racing is so loud that fans would have to wear both earplugs and earmuffs in order to enjoy the spectacle at safe noise levels, new research suggests.

"Noise levels at Formula 1 races are loud enough to potentially cause hearing loss," Craig Dolder, a doctoral candidate in acoustical engineering at the University of Texas at Austin, said at a news conference Wednesday (Dec. 4) here at the 166th meeting of the Acoustical Society of America.

It's no secret that many of the most popular forms of entertainment are noisy. Heavy-metal concerts are known for their ear-splitting volumes, and rowdy Seattle Seahawks fans recently got so noisy at a game that their roars and stomps set off nearby seismographs that register earthquakes. They also snagged a Guinness World Record for the loudest recorded crowd noise. [What If Everyone On Earth Jumped At Once?]

Dolder, who normally spends his time studying the acoustics of fish schools, was an avid fan of Formula 1 car racing. But as an acoustics engineer, he also wondered whether the roar of the engines was damaging his ears.

Online forums provided spotty advice. Some recommended earmuffs, while others said earplugs or noise-canceling headphones were best. Still others claimed there was no need for protection at all and that noise was part of the fun.

To get a more solid answer, he measured sound levels at three locations at a Formula 1 racetrack. He found that at the loudest spot, the peak noise levels were almost 140 decibels, or just below those known to cause permanent hearing loss.

And cumulative noise levels, or those sustained over a length of time, soared well above what the Occupational Safety and Health Administration (OSHA) considers safe for a normal workday. In some spots, each lap of cars around the track put people above a safe level of daily noise exposure. People sitting at the noisiest location would get 85 times their daily noise dosage if they sat through an entire race with no ear protection.

"I just took measurements at three locations," Dolder said. "There's certainly likely to be louder positions in the audience and quieter positions than those I mentioned."

To see what it would take to safely enjoy the sport, he looked at sound-reduction ratings for several popular devices. He found that someone attending a Formula 1 race would have to wear both earplugs and noise-reducing earmuffs typically worn in machine shops simultaneously to get sound levels down to those OSHA considers safe for a normal workday.

Noise-canceling headphones, which are typically designed to remove a constant hum of noise, would probably not effectively eliminate the sharp, transient noises of a race car zooming past, Dolder said.

Still, based on the noise levels he measured, there's no indication that Formula 1 is harder on the ears than noise levels at a heavy-metal concert, Dolder said. As a follow-up, he'd like to investigate the noise levels of Formula 1's American cousin, NASCAR.