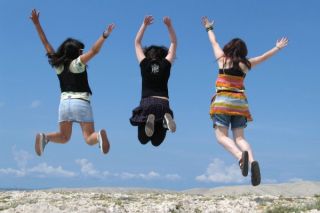 If we all jumped at once, we could move the Earth a tiny bit.
(Image: © sxc.hu)

There are roughly 7 billion people on Earth, with a total weight of approximately 800 billion pounds (363 billion kg). What if we all jumped at once?

Because people are spread somewhat equally around the planet's spherical surface , if we all jumped in place, nothing much would happen — all our lift-offs and impacts would cancel each other out, resulting in zero net force on the Earth, according to work by physicist Rhett Allain.

So let's imagine that everyone could congregate together in one place. Doing so would probably make it easier to synchronize our jump anyway.

Using the laws of conservation of momentum and energy, Allain, a physicist at the University of Southeastern Louisiana and blogger at Dot Physics, calculated what would happen to the 6-trillion-trillion-kilogram Earth under these circumstances. For simplicity's sake, he assumed the average human could jump one foot (30 cm) high and that we'd all be jumping from exactly the same point.

To cut to the chase, Allain found that our jump would push on the Earth ever so slightly, giving it a recoil speed of 2.6 x 10^-13 m/s. That is, in one second, Earth would move about a hundredth of the radius of a single hydrogen atom .

It's not so much, but would the infinitesimally small recoil last forever? Would we have permanently changed the course of the Earth? Allain says no.

"After all the people jump they would 'fall' back down — move towards the Earth. During this time, the Earth would move back up. All would be as it once was," he told Life's Little Mysteries.

The situation is much like two objects of very different masses connected by a spring. If you pull the masses apart and then let go, the force of the spring pulls them back together. The smaller mass moves much more than the larger mass, but both move. The Earth and the people are much like these two masses, Allain explained, except that "in this case, the spring is like gravity."