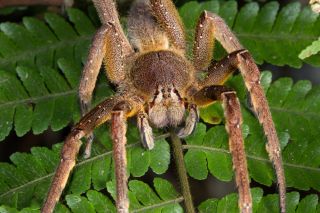 Brazilian wandering spiders, also called armed spiders or banana spiders, belong to the genus Phoneutria, which means "murderess" in Greek. And it's no wonder why — it's one of the most venomous spiders on Earth. Its bite can be deadly to humans, especially children, although antivenin makes death unlikely.

The Guinness Book of World Records has named the Brazilian wandering spider the world's most venomous spider in multiple years, though, as Jo-Anne Nina Sewlal, an arachnologist at the University of the West Indies in Trinidad, pointed out, "Classifying an animal as deadly is controversial," as the amount of damage depends on the amount of venom injected. Also, a "well-publicized study that an intravenous injection of 0.006 mg of venom from these spiders caused death in mice could be regarded of little concern to humans, since we are many times larger than a mouse," she said.

There are eight species of Brazilian wandering spider, all of which can be found in Brazil. Some of the species also can be found throughout Latin America, from Costa Rica to Argentina, according to an article in the journal American Entomologist. Author Richard S. Vetter, a research associate in the department of entomology at the University of California, Riverside, wrote that specimens of these powerful arachnids have been exported to North American and Europe in banana shipments. However, Vetter noted, in many cases of cargo infestation, the spider in question is a harmless Cupiennius species that is misidentified as a Phoneutria species. The two types of spiders look similar.

The taxonomy of Brazilian wandering spiders, according to the Integrated Taxonomic Information System (ITIS), is:

Brazilian wandering spiders are large, with bodies reaching up to 2 inches (5 centimeters) and leg spans reaching about 6 inches (15 cm), according to the Conservation Institute. The species vary in color, though all are hairy, mostly brown and may have a black spot on their bellies.

According to Sewlal, these arachnids "are called wandering spiders because they do not build webs but wander on the forest floor at night, actively hunting prey." They kill by both ambush and direct attack.

They spend most of their day hiding under logs or in crevices, and come out to hunt at night. They eat insects, other spiders and sometimes, small amphibians, reptiles and mice.

Because of the toxicity of their bite and their alarming-looking posture, these spiders have a reputation for being aggressive. But these behaviors are actually defense mechanisms.

"When threatened, they will raise their first two pairs of legs," said Sewlal. This dramatic and intimidating posture exposes the scarlet hair surrounding the fangs on some species. Their threatened stance serves as a warning, indicating to predators that the poisonous spider is ready to attack.

"Their bites are a means of self-defense and only done if they are provoked intentionally or by accident," Sewlal said.

In almost all spider species, the female is larger than the male. This dimorphism is no different in the Brazilian wandering spider. Males approach females cautiously when attempting to mate, according to the biology department at the University of Wisconsin-La Crosse. Males perform a dance to get females' attention, and males often fight each other over the female. The female can be picky, and she often turns down many males before choosing the one she will mate with. Once she does pick one, the male needs to watch out; females often attack the males once copulation is finished.

The female then can store the sperm in a separate chamber from the eggs until she is ready to fertilize them. She will lay up to 1,000 eggs, which are kept safe in a spun-silk egg sac.

Brazilian wandering spiders typically live for one or two years.

Brazilian wandering spiders' venom is a complex cocktail of toxins, proteins and peptides, according to the Natural History Museum in Karlsruhe, Germany. The venom affects ion channels and chemical receptors in victims' neuromuscular systems.

After a human is bitten by one of these spiders, he or she may experience initial symptoms such as severe burning pain at the site of the bite, sweating and goose bumps, Sewlal said. Within 30 minutes, symptoms become systemic and include high or low blood pressure, fast or a slow heartbeat, nausea, abdominal cramping, hypothermia, vertigo, blurred vision, convulsions and excessive sweating associated with shock. People who are bitten by a Brazilian wandering spider should seek medical attention immediately.

In addition to intense pain and possible medical complications, the bite of a Brazilian wandering spider can deliver a long, painful erection to human males. The venom boosts nitric oxide, a chemical that increases blood flow. Several studies have looked at incorporating the venom into drugs for erectile dysfunction.

However, these bites are rare, and envenomations are usually mild, Vetter said. He cited a Brazilian study, published in the journal Revista do Instituto de Medicina Tropical de São Paulo in 2008, that revealed that only 2.3 percent of bites were treated with antivenin. (The other bites did not contain enough venom to require it.) The study also pointed out that, as of that year, only 10 deaths had ever been attributed to the spider's bite in Brazil. According to the study, "cases of serious envenomation are rare (0.5 percent)."

Furthermore, Sewlal pointed out that venom production requires a lot of a spider's resources and time. "So if the spider were to attack frequently and use up all of its venom, it [would] be safe to assume that it has a ready food supply to replace the energy and resources used. This situation does not exist in the wild."