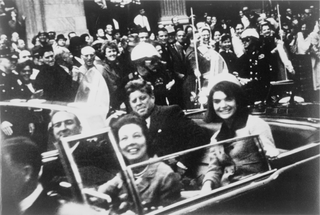 John F. Kennedy in the presidential limousine in Dallas, Tex. on Nov. 22, 1963, moments before his assassination.
(Image: © Victor Hugo King, via The Library of Congress Prints and Photographs Division)

On Nov. 22, 1963, President John F. Kennedy died in Dallas, Texas, the victim of a shot through the head that rung out as his motorcade passed through Dealey Plaza. The spot, marked with a white X, became the birthplace of dozens of conspiracy theories.

The Warren Commission's investigation of the JFK assassination, commissioned by Lyndon B. Johnson in the months following Kennedy's death,  determined that the killer was a former U.S. Marine named Lee Harvey Oswald, acting alone, who fired three shots from the Texas School Book Depository along the motorcade route.

But many Americans aren't buying it. Polls suggest that since the assassination, most people disbelieve the "lone gunman" theory. According to Gallup, 52 percent of Americans believed the Kennedy assassination was a conspiracy in the week after the president's death. The number reached 81 percent in both the 1970s and 1990s.

In a Gallup poll taken this month in the run-up to the 50th anniversary of the assassination, 61 percent think more than one person killed Kennedy. And Kennedy conspiracy beliefs aren't just held by average Joes and Janes: The U.S. House Select Committee on Assassinations argued in 1978 that more than one gunman was present that day, and this month, Secretary of State John Kerry told NBC's "Meet the Press" that he has "serious doubts" that Oswald acted alone.

So if Americans don't think Oswald acted alone, whom do they blame for Kennedy's death? Here is a by-no-means exhaustive sampling of popular Kennedy assassination conspiracy theories.

A few days before the 50th anniversary of the Kennedy assassination, 13 percent of Americans told Gallup pollsters they believed the Mafia was behind the killing.

The Mafia conspiracy theory typically centers on New Orleans mobster Carlos Marcello, who was deported to Guatemala after Kennedy came to office and charged his brother, Robert, with tackling organized crime as the U.S. Attorney General. After Marcello made his way back to the United States (there's an apocryphal story of him slogging through the jungle in alligator shoes), he allegedly made threats against the president. He also allegedly made a jailhouse confession of the crime to an FBI informant. Mafia conspiracy believers point to Lee Harvey Oswald's trip to New Orleans prior to the assassination, as well as to the mob ties of Oswald's killer Jack Ruby. [Infographic: How Does the Mob Work?]

Or did the government do it? Thirteen percent of Kennedy conspiracy believers think so, according to Gallup. It's not entirely clear who these believers consider to be "the government," as a number of theories involve government agents.

One popular accusation, cited by 1 percent of Gallup respondents: Lyndon B. Johnson, Kennedy's vice president, ordered the deed. According to the book "The Man Who Killed Kennedy: The Case Against LBJ" (Skyhorse Publishing, 2013) by libertarian political activist Roger Stone, Kennedy's successor murdered not only Kennedy, but also several others on his path to political power. Most believers of this theory say that LBJ had the motivation — a desire for the presidency — and that he worked with a shadowy cabal of co-conspirators. Supposedly, Johnson hated Kennedy and feared being dropped from the 1964 presidential campaign ticket.

"It's very important to understand that Johnson was merely the linchpin of the conspiracy that I believe involved the CIA," Stone told the Voice of Russia.

Ah, the CIA! Seven percent of conspiracy-loving Americans blame the Central Intelligence Agency for Kennedy's death. The theory was perhaps even more popular in the 1960s and 1970s, as Americans became aware that the CIA really had plotted to assassinate Vietnam's president Ngo Dinh Diem (successfully) and Cuba's Fidel Castro (unsuccessfully). After the failed Bay of Pigs Invasion of Cuba in 1961, Kennedy and the CIA were on rough terms, leading conspiracy-minded individuals to suspect the CIA retaliated by having the president killed.

CIA conspiracies often overlap with mob conspiracies because of revelations that the agency worked with organized crime on its Castro schemes.

But what about Castro himself? He certainly had reason to be unhappy with the Kennedy administration: The CIA was plotting to kill him, after all, and had trained Cuban exiles to attempt to overthrow his communist government in the fumbled Bay of Pigs Invasion.

LBJ himself subscribed to this conspiracy theory. On two separate occasions, in 1968 and 1969, he said in interviews that he thought Castro had been behind the assassination. For his part, Castro denied the allegations, calling the idea "absolute insanity" in a 1977 interview. Having the U.S. president killed would have been too dangerous for Cuba, as the United States would surely retaliate, Castro said.

Nevertheless, today, 5 percent of Americans believe Cuba was behind the assassination, Gallup found.

5. I dunno, just somebody

Forty percent of Americans who blamed a conspiracy for killing Kennedy had no particular sense of who was behind the plot, according to Gallup's November 2013 poll. This large number of uncertain people may reflect a few factors. Dissatisfaction with the official story is probably one. The difficulty of sifting through dozens of potentially plausible villains is likely another. [Read More Kennedy Assasination Theories]