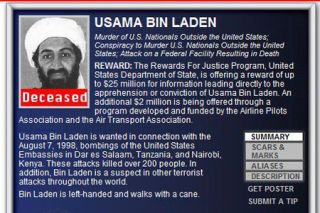 A old wanted poster for Osama bin Laden. His death in 2011 has been the subject of contradictory conspiracy theories.

Did Princess Diana fake her own death to escape the public eye? Or was she killed by a rogue element of the British secret service?

If you agree with one of these theories, there's a good chance you'll subscribe to both even though one suggests Princess Diana is alive, the other dead, a new study indicates.

It's known that people who believe one conspiracy theory are inclined to endorse others as well. But new research shows that conspiracy theorists aren't put off by contradictory theories and offers a reason why.

"They're explained by the overarching theory that there is some kind of cover-up, that authorities are withholding information from us," said Karen Douglas, a study researcher and reader in the school of psychology sciences at the University of Kent in the United Kingdom. "It's not that people are gullible or silly by having those beliefs. … It all fits into the same picture."  [Is This Article Part of a Conspiracy?]

In the first of two experiments, Douglas and colleagues asked 137 students to rate how much they agreed with five conspiracy theories surrounding the death of Princess Diana in a car crash in 1997.

They also asked 102 students about the death of Osama bin Laden last year. The students rated how much they agreed with statements purporting that: bin Laden had died in the American raid; he is still alive; he was already dead when the raid took place; the Obama administration appears to be hiding information about the raid.

Once again, people who believed bin Laden was already dead before the raid were more likely to believe he is still alive. Using statistical analysis, the researchers determined that the link between the two was explained by a belief that the Obama administration was hiding something.

The central idea — that authorities are engaged in massive deceptions intended to further their malevolent goals — supports any individual theory, to the point that theorists can endorse contradictory ones, according to the team.

"Believing that Osama bin Laden is still alive is apparently no obstacle to believing that he has been dead for years," they write in a study published online Wednesday (Jan. 25) in the journal Social Psychological and Personality Science.