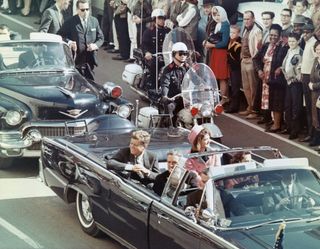 President and Mrs. John F. Kennedy smile at the crowds lining their motorcade route in Dallas, Texas, on Nov. 22, 1963. Minutes later the president was assassinated as his car passed through Dealey Plaza.
(Image: © Courtesy of © Bettmann/CORBIS)

Nearly 50 years after John F. Kennedy was assassinated, debate and conspiracy theories linger over how he was killed, and who exactly was behind it.

In a new television special on PBS' science documentary show "NOVA," a team of experts look at the assassination in a new light, in some cases casting doubt on the "official story" of the president's murder by a lone gunman, Lee Harvey Oswald. The special, called "Cold Case JFK," airs tonight (Nov. 13) at 9 p.m. ET.

The show re-hashes the general story of the assassination, and covers the findings of the official investigation, the widely criticized Warren Commission report. As the experts on the show note, that commission concluded that Oswald acted alone, and only struck Kennedy with two bullets. One of these, the so-called "magic bullet," also allegedly caused serious injuries to Texas Governor John Connally, who was sitting in the front seat of the president's convertible. That theory — which holds that the single bullet caused seven separate wounds in the two men — has long been disputed, but is essential to the single-shooter hypothesis.

In the show, the experts test-fire the exact weapon that Lee Harvey Oswald allegedly used to kill President Kennedy, a Carcano bolt-action rifle. Among other things, their tests show that the bullet would have likely become deformed after passing through Kennedy's body and hitting Connally, which runs counter to the relatively unscathed appearance of the "magic" bullet, found on a gurney at the hospital where both men were rushed after the shooting.

The show also notes that Connally disputed the official story, and that a subsequent investigation by Congress — the House Select Committee on Assassinations' 1979 report — concluded that there was probably a second gunman on the "grassy knoll," making the JFK assassination a conspiracy. Offering credence to this finding, experts on the "NOVA" episode took a variety of advanced laser measurements from Dealey Plaza (where the president was shot), showing it would've indeed been possible to hit Kennedy in the front-right portion of his head from the "grassy knoll" at a distance of about 100 feet.

Nevertheless, the experts examined other evidence that support the conclusion that Oswald was the sole shooter, and that both bullets entered the body from the back, the direction from which Oswald would've been firing. This, however, conflicts with footage from the Zapruder film (footage of the assassination captured by a home video camera), which appears to show Kennedy's head jolting back and to the left, suggesting a shot from the front — and a second gunman.