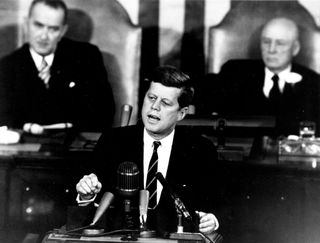 President John F. Kennedy gives his historical speech on sending astronauts to the moon to Congress on May 25, 1961.
(Image: © NASA)

The findings are based on updated bullet analysis techniques and throw a wrench in the case-clinching evidence previously cited by experts to rule out a second assassin.

“By properly reanalyzing the bullet fragments, our nation has a chance to shatter a myth about the JFK assassination,” said study team member Cliff Spiegelman, a statistician at Texas A&M and an expert in the analysis of lead in bullets.

The research will be published in a forthcoming issue of the journal Annals of Applied Statistics.

The Kennedy assassination is arguably one of the most traumatic events in U.S. history, the gravity of which stopped Americans of the time in their tracks. The news sent out ripples of shock and grief across the nation, sparking a wave of scientific investigations and consequent Congressional testimony.

The scientific analyses that followed soon thereafter included a National Academy of Science Committee on Ballistic Acoustics report; forensic evidence on bullet fragment matching by the FBI crime lab and the now-deceased University of California-Irvine chemist Vincent P. Guinn; and a slew of typical forensic evidence such as fingerprints, ballistic evaluations and simulations, crime scene investigations and autopsy findings.

In 1976 the House Select Committee on Assassinations testified in front of Congress, concluding that only one assassin fired bullets that killed Kennedy. As a caveat, the report noted that there was probably an additional shooter, but one whose shots missed all limousine occupants. Nonetheless, the single-gunman theory stood as historical fact.

The conclusions were largely based on Guinn’s comparative bullet lead research. Guinn had compared the chemical make-up of five bullet fragments that came from the crime scene. His lead analysis showed the bullet bits had matching chemical fingerprints and came from two bullets, which Guinn traced back to a single batch of Mannlicher-Carcano bullets fired from Oswald’s rifle.

The analytic lay of the land, however, changed when in 2003, the National Academy of Sciences drew up new guidelines for proper bullet-lead analysis and statistical procedures, stating that past techniques were flawed.

With the updated protocol, the researchers analyzed the chemical make-up of 30 bullets which came from three boxes of Mannlicher-Carcano bullets that originated from two of the only four separate lots ever produced. They measured additional chemical elements beyond those considered by Guinn and also included a quality-control procedure.

According to the scientists, Guinn testified about the scientific validity of conclusions based on chemical matching of the Mannlicher-Carcano bullets, saying: “This great variation from bullet to bullet from the same box thus indicated that, for this unusual kind of ammunition, it would be possible to distinguish one bullet (or bullet fragment) from another, even though they both came from the same box of Mannlicher-Carcano cartridges.”

Comparisons of the new results with evidence used in Guinn’s testimony and that from the NRC report found Guinn’s assumptions to be wrong. Many bullets in a Mannlicher-Carcano box had similar chemical compositions.

“We also found that many bullets in the same box have matching antimony and silver levels; this discovery is contrary to Dr. Guinn’s testimony that based on these two elements virtually every bullet of this type is unique,” say the researchers. Finding a match by chance is not rare, especially when based on just two elements and with bullets from the same box.

“Further, we found that one of the 30 bullets analyzed in our study also compositionally matched one of the fragments from the assassination analyzed by Dr. Guinn,” the researchers state. The results reveal that Guinn’s matches should not be equated with coming from the same rifle or even the same box of bullets. This opens the door for the possibility that another gunman shot at and hit Kennedy, they write.

The researchers say that based on their findings, and “given the significance and impact of the JFK assassination, it is scientifically desirable for the evidentiary fragments to be reanalyzed.”