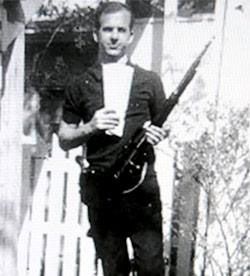 The incriminating photo of accused John F. Kennedy assassin Lee Harvey Oswald. Oswald and others claimed it was a fake, but forensic analysis has upheld its authenticity.

An incriminating photograph of accused John F. Kennedy assassin Lee Harvey Oswald is not a fake, as Oswald and others had claimed, a new analysis concludes.

President Kennedy was assassinated on Nov. 22, 1963, during a motorcade in Dallas, Texas. Oswald was arrested for the crime, but was killed by Jack Ruby on Nov. 24 before he could stand trial. The Warren Commission concluded in 1964 that Oswald killed Kennedy single-handedly.

The photograph shows Oswald in a backyard setting holding a rifle in one hand and Marxist newspapers in the other. Oswald and others who believed the Kennedy assassination was a broader conspiracy claimed that the incriminating photo was a fake, noting the seemingly inconsistent lighting and shadows.

Dartmouth computer scientist Hany Farid digitally analyzed the image and concluded that the photo had not been altered.

"Those who believe that there was a broader conspiracy can no longer point to this photo as possible evidence," Farid said in a statement today.

Farid added that federal officials long ago said this image had not been tampered with, but a surprising number of skeptics still assert that there was a conspiracy.

Farid and his team have developed a number of digital forensic tools used to determine whether digital photos have been manipulated, and his research is often used by law enforcement officials and in legal proceedings. The tools can measure statistical inconsistencies in the underlying image pixels, improbable lighting and shadow, physically impossible perspective distortion, and other artifacts introduced by photo manipulators.

At a casual glance, the lighting and shadows in the Oswald photo appear to many to be incongruous with the outdoor lighting.

"The human brain, while remarkable in many aspects, also has its weaknesses," Farid said. "The visual system can be quite inept at making judgments regarding 3-D geometry, lighting, and shadows."

To determine if the lighting in the Oswald photo was in fact incongruous, Farid constructed a 3-D model of Oswald's head and portions of the backyard scene, from which he was able to determine that a single light source, the sun, could explain all of the shadows in the photo.

"It is highly improbable that anyone could have created such a perfect forgery with the technology available in 1963," Farid said.

The Oswald photo may not be the last that modern scientists can analyze for signs of forgery.

"As our digital forensic tools become more sophisticated, we increasingly have the ability to apply them to historic photos in an attempt to resolve some long-standing mysteries," Farid said.

Farid's analysis will be detailed in a future issue of the journal Perception.