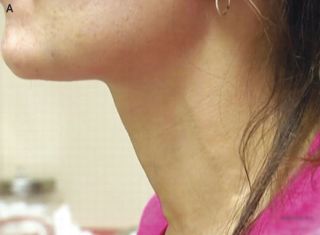 Abnormal pulses in a woman's neck were caused by a heart valve problem.
(Image: © The New England Journal of Medicine ©2013)

A 33-year-old woman in Canada who had large, abnormal pulses that were clearly visible in her neck ultimately needed surgery to combat a bacterial infection in her heart, according to a new report of her case.

The pulses were observed while the woman was being evaluated to see if she needed a replacement heart valve.

Such abnormal pulses are actually common, and are caused by a heart problem known as tricuspid regurgitation, said Dr. Juan Crestanello, a cardiac surgeon and assistant professor of surgery at the Ohio State University Wexner Medical Center, who was not involved with the woman's care.

"The valves in the heart are like doors," allowing the blood to flow only in one direction, Crestanello said.

But if the tricuspid valve is damaged, some blood can leak from the right ventricle back up into the right atrium, causing tricuspid regurgitation. This causes the right atrium to get bigger, and can change the pressure in nearby blood vessels, potentially leading to abnormal pulses seen in the neck veins, according to the American Heart Association.

Often, people with this condition have heart valve inflammation, or endocarditis, caused by a bacterial infection. The woman in the report had been previously diagnosed with a methicillin-resistant Staphylococcus aureus (MRSA) infection in the heart valve.

The woman required surgery for a new heart valve, and she recovered.

Crestanello said he sees about 10 to 15 patients a year with tricuspid regurgitation, but he treats only patients that need surgery. Some patients can be treated with antibiotics, and don't require surgery, he said.

The report, by researchers at the University of Saskatchewan, was published Nov. 13 in the New England Journal of Medicine.