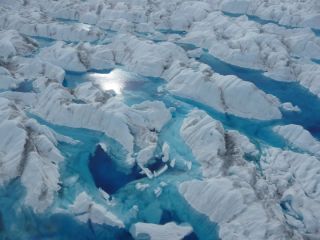 The Intergovernmental Panel on Climate Change (IPCC), an international organization established to assess the science of climate change and the related environmental and socioeconomic impacts, will be releasing part of its latest report, the first in six years, this month.

The assessment, known as the Working Group I report, represents a summary of the most recent scientific research on climate change, including studies of sea level rise, melting glaciers and changes in global temperatures.

Next week, from Sept. 23 to Sept. 26, more than 250 climate scientists will meet in Stockholm, Sweden, to finalize the Working Group I report, which will be released on Sept. 27. Here are some frequently asked questions about the IPCC's assessments, and what we may expect to see next week.

What is the IPCC?

The Intergovernmental Panel on Climate Change was established by the United Nations Environmental Programme and the World Meteorological Organization in 1988.

The organization's mission is to collect and assess the most recent published work on climate change, and provide comprehensive assessments of the potential consequences. In addition to examining the environmental and socioeconomic impacts, the scientists also present ways to mitigate these effects. [8 Ways Global Warming is Already Changing the World]

The IPCC releases big, sweeping assessment reports on the state of climate change every five or six years. Previous IPCC reports were published in 1990, 1995, 2001 and 2007. The first section of the newest report, known as the Fifth Assessment Report, or AR5, will be released on Sept. 27, with three other parts expected to follow in 2014.

The IPCC is widely regarded as the leading international scientific advisory group on climate change and global warming, and the organization's reports reflect the agreement of the world's most prominent climate scientists. The IPCC's assessments are also used to inform policymakers on the risks of climate change, although significant governmental action has been slow.

Who is involved in the IPCC?

The IPCC is made up of thousands of scientists from universities and think tanks all around the world, who participate in writing and reviewing the four sections of the group's reports on a voluntary basis. The IPCC's assessments are also reviewed by the governments of more than 120 participating countries.

The IPCC has been chaired by Rajendra Pachauri since 2002.The organization does not conduct its own research, but rather integrates the findings of published studies within the scientific literature on climate change. The forthcoming IPCC report includes research published as recently as spring 2013.

What does the IPCC do?

Since the IPCC's conclusions require consensus among the panel members, the organization's reports tend to feature fairly conservative estimates, with a tendency to underestimate rather than overestimate the potential impacts of climate change.

How are scientists selected to contribute to the report?

The IPCC received approximately 3,000 author nominations for its Fifth Assessment Report from experts, organizations and governments around the globe. In May 2010, at a meeting in Geneva, the selected authors and review editors for the three working groups were announced. Lead authors for the reports are selected by elected members of the IPCC's Task Force Bureau, and all of the report's contributing authors are volunteers.

In total, there are 831 experts from 85 countries who are contributing to the IPCC's Fifth Assessment Report, and they represent a diverse range of fields, including oceanography, economics, physics, meteorology and social sciences.

The IPCC received 50 percent more author nominations for its latest report than for the previous report published in 2007. Additionally, 63 percent of the Fifth Assessment Report's authors are new to the IPCC process, according to the organization's website.

When will the IPCC release its new report?

The latest IPCC report will be released in stages, beginning this month. A Summary for Policymakers, based on the assessments of Working Group I, will be distributed on Sept. 27. The IPCC has also tentatively scheduled to release draft chapters from the Working Group I report online on Sept. 30.

What can we expect from the report?

At this point, it is difficult to know precisely what will be contained in the IPCC's Fifth Assessment Report, but some climatologists not involved with the organization have made predictions based on the scope of recent peer-reviewed climate research.

The IPCC's latest report will likely not have any startlingly new findings. Instead, the assessment will confirm many previous studies, but may increase levels of certainty surrounding some climate change issues, including the role of human activity in global warming, said Heidi Cullen, vice president and chief climatologist for Climate Central, a nonprofit science journalism organization based in Princeton, N.J.

"Science is more certain than ever that the majority of the warming since 1950 has indeed been caused by human activity — burning fossil fuels, coal, oil and gas," Cullen told reporters in a news briefing on Sept. 13.

The last IPCC report, published in 2007, said that it was "very likely" that human-induced greenhouse gas emissions caused more than half of the observed warming. Since the IPCC's assessment reports are meant to be comprehensive and are geared toward policymakers, the language used by the scientists tends to be more general.

Other findings that will likely be revealed in the IPCC's new report include:

-Ice sheets and glaciers are melting faster than had been predicted in the 1990s.

-Ocean acidification is increasing due to excess amounts of carbon dioxide in the atmosphere.

-Arctic sea ice is retreating faster than had been estimated in the previous IPCC report.

-Surface warming has slowed in the past decade, which research has indicated may be due to natural ocean heat cycles or the emission of light-blocking aerosols.

How does the IPCC reach their conclusions?

IPCC report authors comb through published, peer-reviewed research to assess the scope and impact of climate change. The IPCC includes all relevant scientific information, and clearly identifies disparate views with all the relevant scientific and technical support.

Priority is given to peer-reviewed studies, but authors may include information from government and industry reports if it helps to expand the breadth and depth of the assessment, according to the IPCC.

"Use of this literature brings with it an extra responsibility for the author teams to ensure the quality and validity of cited sources and information," IPCC officials said on the organization's website.

Once drafts of the report are written, there are typically three steps to the IPCC's review process, beginning with a 6- to 8-week period of expert analysis.

During this time, the selected authors put together a draft of their working group report, which is sent out to experts for review. After the resulting comments have been addressed, the authors put together a second draft that is edited by experts and governments. A final review of the report's Summaries for Policymakers, overview chapters and final Synthesis Report is conducted by government officials before the assessment is approved.