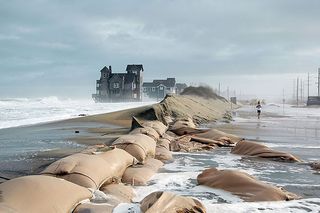 New satellite measurements suggest that global sea levels are rising faster than the most recent projections by the United Nations' climate change panel.

The new report found that sea levels are rising at an annual rate of 0.12 inches (3.2 millimeters) — 60 percent faster than the best estimate of 0.08 inches (2 millimeters) per year, which the Intergovernmental Panel on Climate Change (IPCC) calculated in 2007.

"This study shows once again that the IPCC is far from alarmist, but in fact has underestimated the problem of climate change," German oceanographer and climatologist Stefan Rahmstorf, who led the study, said in a statement. "That applies not just for sea-level rise, but also to extreme events and the Arctic sea-ice loss."

Satellites, which measure changes in sea level by bouncing radar waves off the sea surface, provide much more accurate measurements than tide gauges, because they have near-global coverage, as opposed to just coastal coverage, researchers say.

Seas-level rise is thought to be driven by glacier melt as well as a phenomenon known as thermal expansion, which occurs when ocean water expands as it warms. Rising tides are a concern because they boost the threat of extreme flooding in populous coastal areas, putting millions of people at risk worldwide. The IPCC estimated the seas would rise up to an average of 6.6 feet (2 meters) by 2100, though some areas are expected to be hit harder than others.

Their findings appear today (Nov. 28) in the journal Environmental Research Letters, as delegates from 190 countries meet in Doha, Qatar, this week for the U.N.'s Climate Change Conference. The IPCC's next comprehensive report on the state of climate change is due out by 2014.