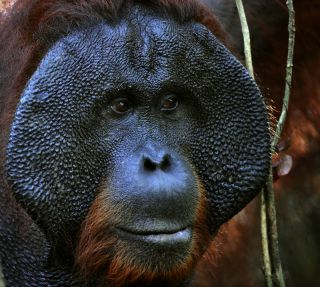 Male orangutans emit long calls in the direction they plan to roam the next day, allowing other members of the community to plan accordingly.
(Image: © Sergey Uryadnikov | Shutterstock)

The night before Sumatran male orangutans travel through the forest, they often emit long, loud calls in the direction they plan to go, new research shows. This call, the study suggests, provides a cue to other members of the community to plan for the trip ahead, and is the first field-observed case of primates planning for future events this far in advance.

Animals' ability to plan remains poorly understood, and has only ever been observed in a limited number of great apes and jay species within experimental or captive environments. For example, in one experimental setup, chimpanzees and orangutans were found to be more likely to choose a certain tool that would grant them a reward an hour later, and a zoo chimpanzee was once observed to gather stockpiles of stones and pieces of concrete to throw at visitors later on in a given day.

Still, this behavior is not well-documented in the field. To provide a more concrete assessment of animal planning capabilities in natural environments, researchers from the University of Zurich followed 15 different adult Sumatran orangutan males in the wild for up to 10 days each, specifically taking note of how male calls throughout a day correlated with their travels later that day and the following day. [8 Humanlike Behaviors of Primates]

The team found that, in the evenings, dominant males let out long calls audible more than half a mile (1 kilometer) away that often predicted the direction in which that male would travel the next day. Calls made earlier in the day were less likely to correlate with the direction traveled. This suggests that these long calls function as travel cues to other members of a group, the researchers said.

"We found that males emitted long calls mostly facing the direction they traveled a few hours later, or even after a night's rest," study co-author Karin Isler said in a statement.

By following the orangutan communities for between 10 and 12.5 hours each day, the team found that females were more likely to follow the call than subordinate males. The team suggests that this is a way for females to remain in close proximity to their preferred mates, and to avoid subordinate males who tend to molest females with forceful matings.

Allison Howard, a researcher at the University of Georgia who studies primate route planning and was not involved in the study, said that the orangutans' ability to plan the night before and sleep on their decision before traveling the next day has not yet been identified in other primate species.

Still, other animal species very well may be able to plan in this way, Howard said, but simply may not do so in such a conspicuous way.

The new findings, detailed today (Sept. 11) in the journal PLOS ONE, do not explain how or why the orangutans choose the direction of their paths, and the researchers note that these details call for additional research.