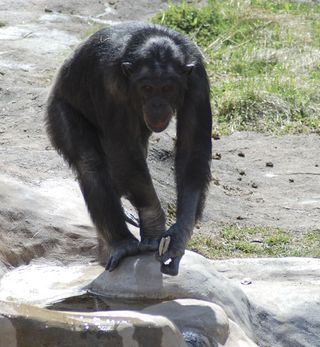 The 33-year-old chimpanzee, Santino, has a habit of sneaking up on visitors and hurling stone projectiles at them. Here, he is slowly moving toward visitors, with two projectiles in his left hand. (This image was taken 31 seconds before the throw.)
(Image: © Tomas Persson, PLoS ONE.)

A chimp that creates hiding places for rocks he throws at zoo visitors reveals for the first time that humanity's closest living relatives can plan to deceive, researchers say.

These findings could shed light on the evolution of higher mental functions such as planning, investigators added.

The chimpanzee known as Santino is the dominant male of his group at Furuvik Zoo in Sweden. Intriguingly, past research showed the ape calmly gathered stones from his enclosure's moat and pieces of concrete he pulled off an artificial island into stockpiles he later hurled at zoo visitors — an instance of spontaneous planning for a future event, a mental ability once widely thought limited to humans.

"A lot of great apes, especially dominant males, throw things at human bystanders," said researcher Mathias Osvath, a comparative cognitive scientist and scientific director of Lund University's Primate Research Station Furuvik in Sweden. "It is most often part of their dominance displays and an effective way to make people move, which is the main purpose of a display. Other individuals are supposed to move during such displays to accept the dominance." [Photos of Santino the Chimp]

Santino doesn't throw stones at Osvath or others that he knows.

"He never hits anyone, so protective gear is not necessary," Osvath said. "We know each other, and we often play. I don't have to be particularly cautious, more than never forgetting that they are extremely strong animals who can cause serious damage to you if they want to."

Now scientists find Santino appears even more foresighted and innovative than previously thought. The ape conceals his weapon caches, showing that chimpanzees are capable of even more complex planning than once known.

Santino not only hid projectiles behind logs and rocks, he also manufactured ones from hay. All projectiles were placed near the visitors' area, and helped lull visitors into a false sense of security, allowing him the chance to fling his missiles at crowds before they had time to back away.

The chimpanzee made his first hay hiding-place after zoo guides had repeatedly backed visitors away from him after noticing a projectile in his hands. At one point, after a projectile-throwing attempt by Santino, a tour guide left the chimp alone for hours without visitors. When the guide and a visitor group came back, Santino acted nonchalant while holding projectiles and walking toward the group.

"To the guide, his appearance did not suggest intentions of throwing. The chimpanzee even stopped and picked up an apple floating in the water, from which he took a bite as he continued approaching the visitors," wrote Osvath and colleague Elin Karvonen of Lund University online May 9 in the journal PLoS ONE. "Just within range, he made a sudden throw at the group."

After several attempts at deceiving visitors, Santino created this concealment when the people he intended to fool were out of his sight, meaning he was capable of planning even without having any targets immediately available as aids to his plans.

"The results indicate that he can anticipate behaviors of others who are not present in the situation where he makes his preparations," Osvath told LiveScience.

These findings could shed light on the evolution of thinking, Osvath added. For instance, seeing that chimpanzees have similar capabilities as us could yield insights on what our last common ancestor was like.