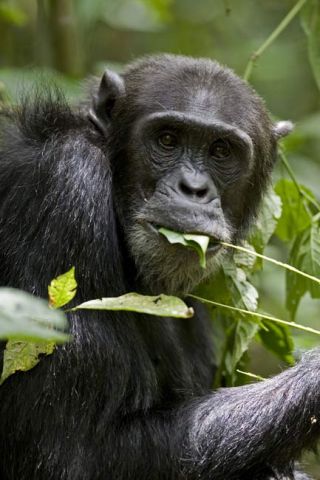 Chimps and orangutans plan for the future just like us.

They are capable of exercising self-control to postpone gratification and to imagine future events via "mental time travel," according to new research from Lund University Cognitive Science in Sweden.

The skill of future planning was commonly thought to be exclusive to humans, although some studies of apes and crows have challenged this idea, say researchers Mathias and Helena Osvath. Now, for the first time, there is "conclusive evidence of advanced planning capacities in non-human species," they say.

The Osvaths figured this out by showing two female chimpanzees (Pan troglodytes) and one male orangutan (Pongo abelii) from the Lund University Primate Research Station at the Furuvik Zoo a hose and how to use it to extract fruit soup.

The researchers then tempted the apes (apes are a group that includes chimps, gorillas, orangutans and humans) with their favorite fruit alongside the hose to test their ability to suppress the choice of the immediate reward (favorite fruit) in favor of a tool (the hose) that would lead to a larger reward about an hour later (the fruit soup).

The apes chose the hose more frequently than their favorite fruit, suggesting they are able to make choices in favor of future needs even when they compete directly with an immediate reward.

A second experiment involved offering the apes new tools — a functional one that would work like the hose and two "distractor objects," such as a blue plastic car, a small teddy bear or a discarded wrist watch.

The apes consciously chose the new functional tool more often and later used it appropriately, demonstrating they selected the tool based on what it could do for them down the line.

The apes were likely pre-experiencing a future event, that is visualizing the use of the new tool to extract the fruit soup, the Osvaths say.

The researchers suggest conducting similar experiments in the future on small children and on gibbons, the closest relatives to the great apes.

The results are detailed online this week in the journal Animal Cognition. The research was funded by Lunds University and the European Union's SEDSU project, "Stages in the evolution and development of sign use."