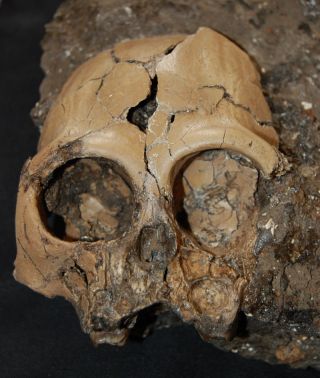 An extremely rare juvenile skull of an extinct ape that lived some 6 million years ago has now been revealed from China.
(Image: © Jay Kelley.)

An extremely rare juvenile skull of an extinct ape has now been revealed from China, findings that suggest a very diverse group of apes once lived in Southeast Asia, researchers say.

Apes, which include gorillas, chimpanzees and orangutans, are the closest living relatives of humanity. They once inhabited most of the Old World, including large portions of Europe and Asia, and a much larger swath of Africa than they do at present.

A critical time in the evolution of humans and their ape relatives was the late Miocene Epoch about 5 million to 11 million years ago. Near the end of the Miocene, apes had become extinct in most of Eurasia. [In Photos: A Game-Changing Primate Discovery]

"Climate and environments were changing rapidly throughout the world at the end of the Miocene, and these changes are reflected in the changing faunas, particularly in the Old World, where animals adapted to living in more equable forest habitats gave way in most places to those capable of living in more open habitats and drier, more seasonal conditions," said researcher Jay Kelley, a paleoanthropologist at the Institute of Human Origins at Arizona State University in Tempe.

To explore ape evolution during the late Miocene, scientists investigated a site in the Yunnan province in southern China called Shuitangba, which is a mine for lignite, a form of low-grade coal. Southern China was less affected by the deteriorating climate during the late Miocene that drove extinct many ape species throughout the rest of Eurasia.

Miners have recovered fossils at Shuitangba since at least the 1950s. The investigators began excavating at the site in 2007. "The workers keep a lignite fire going all the time to roast potatoes, which is smoky and smells awful, and your hair and clothes become permeated with the lignite smell," Kelley said.

The researchers now reveal the 6-million-year-old cranium of the extinct ape Lufengpithecus, a skull about 3 inches (8 centimeters) wide. [Wipe Out! History's 7 Most Mysterious Extinctions]

"It's from a young juvenile — it would have been perhaps about 5 years old if its growth was like that of chimpanzees," Kelley told LiveScience. "I suspect adults of this species would have been in the body size range of large chimpanzees, the larger males perhaps somewhat larger. We know from the developing canine teeth that our juvenile was a male."

Back when these apes were alive, the area was fairly swampy — "warm or hot and wet for much of the year, even if there was some seasonality," Kelley said. "We have also found a diverse array of birds associated with wetter environments, and mammals associated with wet environments such as beavers and otters. We have also uncovered the trunks of very large trees, so it was heavily forested."

Skulls of fossil apes and other close relatives of humanity are extremely rare, especially those of infants and young juveniles. This find is only the second relatively complete cranium of a young juvenile from the Old World during the entire Miocene, an epoch stretching from 5 million to 23 million years ago.

"The preservation of the new cranium is excellent," Kelley said in a statement. "This is important because all previously discovered adult crania of the species to which it is assigned, Lufengpithecus lufengensis, were badly crushed and distorted during the fossilization process."

In living species of apes, skulls at the same stage of development as the new fossil already closely resemble those of adults. "Therefore, the new cranium, despite being from a juvenile, gives researchers the best look at the cranial anatomy of Lufengpithecus lufengensis," Kelley said.

Due to where and when Lufengpithecus lived, scientists had thought it was related to the modern orangutan, which is now limited to Southeast Asia, but once also dwelled in southern China. However, the new skull bears little resemblance to living orangutans.

"More similarity to orangutans would have been expected," Kelley said.

As such, the researchers now suggest Lufengpithecus represents a late-surviving lineage of Eurasian apes without clear links to living groups of apes.

"It increasingly appears that there was a very diverse radiation of apes surviving in southeastern Asia long after apes had become extinct in most of the rest of Eurasia," Kelley said.

The researchers hope further excavations will unearth remains of adult specimens to better uncover the relationships between this lineage and other fossil and living apes.

"There is a natural tendency among paleoanthropologists to want one's discovery to be relevant to human evolution, but I don't think that's the case here," Kelley said. "The evolution of apes is equally fascinating and to that our new cranium can make a valuable contribution."

The scientists will detail their findings in print in November in the journal Chinese Science Bulletin.