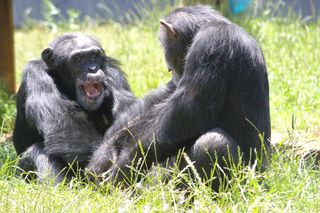 Chimpanzees at Chimp Haven, a national chimpanzee sanctuary in Louisiana, grooming and playing with one another.
(Image: © Chimp Haven)

Just like humans, chimpanzees and orangutans can apparently remember things that happened years ago in their lives, scientists now find.

People's memories of days long gone by can often surface unexpectedly in response to sensory cues, such as scents. For instance, in a renowned scene in Marcel Proust's most famous novel, commonly known as "Remembrance of Things Past," the flavor of a certain cake known as a madeleine spontaneously evoked a long-forgotten childhood memory for the main character regarding breakfast at his aunt's house.

The ability to remember events from the remote past "has been considered a defining feature of human nature," said comparative psychologist Gema Martin-Ordas, of Aarhus University in Denmark. Now she and her colleagues find that chimpanzees and orangutans can also recall distant memories.

"These results show that we have more in common than we previously thought with our closest relatives," Martin-Ordas told LiveScience.

In experiments with 15 chimpanzees and four orangutans, the scientists tested whether the animals could remember events they experienced years ago. Three years prior, the apes had watched the researchers hide tools that the chimpanzees and orangutans needed to grab rewards that were otherwise out of their reach. As the apes looked on, the researchers repeated hiding the tools a total of four times.

In the new experiment, the scientists had the apes carry out the same tasks, in the same rooms, with the same experimenters. With just one exception, all the apes tested recalled where the necessary tool was hidden to reach its reward.

"I was surprised to find out not only that they remembered the event that took place three years ago, but also that they did it so fast," Martin-Ordas said. "On average it took them five seconds to go and find the tools." [8 Humanlike Behaviors of Primates]

The short amount of time suggests the animals did not simply walk around until they found the tools, she said. "More probably, it was the recalled event that enabled them to find the tools directly."

The researchers also had chimpanzees and orangutans conduct another tool-finding task, with a slightly different setup, and then had them repeat it two weeks later. Similar results were seen — the animals instantaneously remembered where to look — even though the apes initially carried out the task only once.

These findings also showed the chimpanzees and orangutans could distinguish between similar past events in which the same locations and people were involved.

"This is the first study showing that chimpanzees and orangutans remember personal past events that took place a long time ago, when presented with the appropriate cues," Martin-Ordas said. "I think these two studies open up a completely new line of research to approach the study of memories for past events in nonhuman animals."

The scientists detailed their findings July 18 in the journal Current Biology.