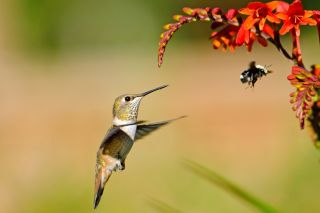 A Rufous hummingbird and a bumblebee fly toward Crocosmia flowers.
(Image: © Birdiegal | Shutterstock)

The phrase "the birds and the bees" is a metaphor for explaining the mechanics of reproduction to younger children, relying on imagery of bees pollinating and eggs hatching to substitute for a more technical explanation of sexual intercourse. It is a way of deflecting the inevitable question that every parent dreads: "Where do babies come from?" and it is an alternative to the explanation that the stork delivers babies.

It is uncertain as to when the phrase was first used or how it gained popularity. It does not necessarily mean that parents are explaining how birds and bees reproduce. The connection between human sexuality and eggs and pollination is vague, which can cause some confusion among curious children.

Though there are some variations, the story typically involves bees pollinating flowers, symbolizing male fertilization, and the birds laying eggs, which equates to female ovulation. In another telling of the story, a baby is created when a bee stings a bird. [Related: Animal Sex: How Bees Do It]

There are quite a few allusions to the phrase in literature and song. One of the early references to this bird and bees as a euphemism for reproduction is Samuel Taylor Coleridge's 1825 poem, “Work Without Hope”:

All Nature seems at work. Slugs leave their lair —     The bees are stirring — birds are on the wing —     And Winter, slumbering in the open air,     Wears on his smiling face a dream of Spring!     And I, the while, the sole unbusy thing,     Nor honey make, nor pair, nor build, nor sing.

Another commonly cited use of the phrase is American naturalist John Burroughs’ 1875 set of essays, "Birds and Bees, Sharp Eyes and other Papers." These were attempts to provide children with simple explanations of nature, but there is no attempt at sex education.

Dr. Emma Frances Angell Drake described the birds and bees in a section of the publication "The Story of Life," which was widely distributed between 1893 and 1930. In her explanation of reproduction to her young daughters, she used images of blue eggs in the robin's nest, wind blowing pollen dust from one plant to the other, and bees gathering honey from the flowers. [Related: Animal Sex: How Birds Do It]

A more direct reference can be found in Cole Porter's lyrics to the 1928 song "Let's Do It."

The phrase also appeared in a 1939 issue of the "Freeport Journal Standard": “A Frenchman was born sophisticated: he knows about the birds and the bees. In consequence, French films are made on a basis of artistic understanding that does not hamper the story."

A more modern reference to the phrase occurred on "The Simpsons." The episode includes a scene has 10-year-old Bart Simpson remarking to his friend Milhouse, "The sun is out, birds are singing, bees are trying to have sex with them — as is my understanding ..."