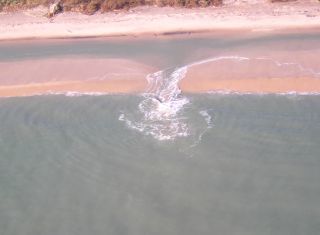 Every year, more than 100 beachgoers on average drown due to these strong river-like channels of water that pull swimmers away from the shore, according to the U.S. Lifesaving Association (USLA).

And that's just in the United States. Nearly half of all rescues made by lifeguards at ocean beaches are related to rip currents, according to the USLA. Sharks typically kill about 6 people a year globally. [Find Out Your Odds of Dying from Various Phenomena]

A common perception is that rip currents pull swimmers underwater; in reality, they're strong, narrow currents that flow away from the beach.

"Essentially, they're rivers of the sea," said Wendy Carey, a coastal hazards specialist with the Delaware Sea Grant Advisory Service at the University of Delaware.

"People start going under because they panic, and they feel like the current is pulling them under," Carey said. "There is no current that will pull you under in the ocean."

There are many different types of rip currents, and they form in several ways. Quickly changing wave heights, which occur when a large set of swells rolls in, can trigger a rip current. Rip currents can also occur at spots where there's a break in a sandbar; there, water is funneled out to sea. These channels in sandbars lie just off the beach. When water returns to the ocean, it follows the path of least resistance, which is typically through these channels. Strong rip currents also often appear next to structures such as piers, jetties and groins, Carey said.

Breaking waves are the key ingredients for all rip currents. "If there are no breaking waves, there won't be any rip currents," Carey said. [Science of Summer: How Do Ocean Waves Form?]

The risk of rip currents is determined by many factors, including weather, tides, local variations in beach shape and how waves break offshore. Some beaches may have rip currents nearly all the time, while other beaches almost never see the dangerous flows.

These strong and often very localized currents can carry unsuspecting swimmers out to sea. The currents usually move at 1 to 2 feet per second (0.3 to 0.6 meters per second), but stronger ones can pull at 8 feet per second (1.6 meters/second). That's the same pace as a world-record Olympic freestyler, Carey said. "Even an Olympic swimmer would find themselves going backward in a rip current pulse," she said. (Olympic gold medalist Michael Phelps can swim the butterfly stroke at about 6.5 feet/second.)

Rip currents can speed up dramatically in a short time. The unsteady flow of a rip current is similar to standing in a river on land. The strong flow can sweep you off your feet, Carey said. "An adult standing in waist-deep water in a rip current would find it hard to stay in the same place," she said.

Rip tide is a misnomer

Heavy breaking waves can trigger a sudden rip current, but rip currents are most hazardous around low tide, when water is already pulling away from the beach. In the past, rip currents were sometimes called rip tides, which was a mistake, Carey said. "Tides are really slow changes in water level and by themselves do not induce a rip current," she said. "A rip current is not at all a tide."

Scientists have been studying rip currents for more than 100 years. In the past decade, advances in measurement techniques have provided many new insights into how these complicated currents work. Researchers now toss GPS-equipped drifters into the surf to precisely track rip current movements and speed. Acoustic Doppler current profiling (similar to sonar) has revealed the inner workings of rip currents. This acoustic Doppler current profiler sends out high-frequency pulses of sound that hit and bounce off particles in the water. The instrument measures the frequency of this returning signal — If the particle (and surrounding water) is moving away from the instrument, the signal will have a lower frequency and if it's moving toward the instrument, the return signal will have a higher frequency, according to NOAA.

"There is a new understanding of rip current flow and behavior," Carey said.

How to spot a rip current

Surviving a rip current starts before you even enter the water, Carey said. "Avoidance is the most important thing. Swim at a lifeguard-protected beach and talk to the lifeguard on duty about ocean conditions for the day," she said. "It's also really important to know how to swim and how to float before you venture ankle-deep into the ocean."

Learning how to spot a rip current can help you avoid getting caught, Carey added. For instance, rip currents above deep sandbar channels look like calm patches of water. These calmer waters are often between turbulent breaking waves, presenting an inviting pathway to inexperienced beachgoers. "Sometimes people inadvertently enter the water in one of the most dangerous spots just because it looks calm," Carey said. [Related: 50 Interesting Facts About the Earth]

The following features could also signal there's a rip current in the water, according to the USLA:

Even if you don't spot any of these signs, a rip current could still be underway. The USLA recommends wearing polarized sunglasses to see these ocean features more clearly.

How to survive a rip current

It is easy to be caught in a rip current. Most often, it happens in waist-deep water, experts say. A person will dive under a wave, but when they resurface they find they are much farther from the beach and still being pulled away.

What they do next can decide their fate.

Those who understand the dynamics of rip currents advise remaining calm. Conserve energy. A rip current is like a giant water treadmill that you can't turn off, so it does no good to try to swim against it.

"Even small rips can flow faster than a person can swim. You should not try to swim against the rip," Carey said.

Rip currents are often narrow, and the National Oceanic and Atmospheric Administration (NOAA) and the USLA suggest trying to swim parallel to the shore and out of the current. Once you've gotten out of the current, you can begin swimming back to shore.

"You may want to swim toward whitewater, where the waves are breaking," Carey said. "That may help guide you out of the rip."

"There are still occasions where the drifters would not be brought back," she said.

If swimming doesn't seem to be working for you, conserve your energy by floating or treading water and try to get the attention of someone on shore, hopefully a lifeguard.

And if you see someone who is caught in a rip current, don't become a victim yourself, the USLA warns.

The USLA suggests that you:

"There are many tragic stories where someone went into a rip current to try and save someone else and they became drowning victims themselves," Carey said.