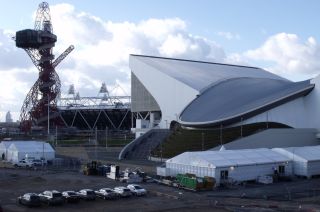 An Olympic swimmer's training, technique and even her suit can help her swim faster in races. But can the pool she swims in make a difference, too? Missy Franklin, who will swim for the U.S. in the London Olympics, says it can.

The best pools reduce the ripples and waves swimmers create, which slow down competitors. A turbulent pool makes it "almost impossible to really go fast," Franklin said in interview with the National Science Foundation (NSF).

This summer's Olympic swimming events will take place at the newly built London Aquatics Center, which houses a specially designed "fast pool." The pool's gutters, lane markers and proportions are all engineered to minimize water turbulence. The pool's depth is adjustable and for the Olympics, it'll be set to 3 meters (about 10 feet), which is enough to dissipate the downward waves created by swimmers' kicks before the waves hit the pool's bottom.

"You see engineering everywhere when you build these pools," said Anette Hosoi, a mechanical engineer at the Massachusetts Institute of Technology. Without such engineering, swimming pools would act as hard-walled boxes that bounce waves right back at swimmers. [Video: What Makes the 2012 Olympic Pool So Fast?]

Franklin said she has enjoyed all of the high-tech pools she has swim in during the national competitions that brought her to the Olympics, but top swimmers tend to have preferences for certain pools. "You kind of learn as you go along — you go to all these different pools — what you like and what you don't like," she said.