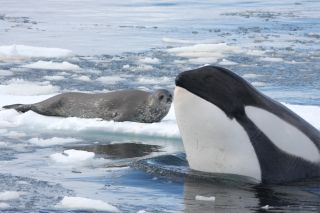 A killer whale identifies a Weddell seal resting on an ice floe off the western Antarctic Peninsula. The whale will notify other killer whales in the area so they can coordinate a wave to wash the seal off the floe.
(Image: © Robert Pitman/NOAA)

Even killer whales play favorites, though not in a helpful way. Researchers have found the giant hunters in Antarctic waters favor Weddell seals as their preferred food.

And to take down a Weddell seal (Leptonychotes weddellii), the whales make waves, the researchers observed.

The science team monitored killer whales hunting in ice floes, off the western Antarctic Peninsula during January 2009, finding they snubbed the more abundant crabeater seals in favor of the Weddells.

"These killer whales would identify and then attack Weddell seals almost exclusively, even though they made up only about 15 percent of the available seal population," said study researcher Robert Pitman from the National Oceanic and Atmospheric Administration's (NOAA's) Southwest Fisheries Science Center in La Jolla, Calif. (The team had identified 365 seals in the area.) [Read: Pitman Has Snowball Fight with Killer Whale]

Here's how they made their kill: The whales, sometimes as many as seven alongside one another, would charge the ice floe creating a wave that either washed the seal off the ice or broke the ice into smaller pieces that were then more vulnerable to another attack.

Once the seal was washed off the ice, the killer whales worked as a group to keep it from hauling onto the safety of another ice floe. The whales seemed to try to confuse the seal by causing turbulence in the water with their tails and blowing bubbles under the water through their blowholes, the researchers said.

Away from the ice, the whales attempted to tire and eventually drown the animal by pulling it under water by its hind flippers. Eventually the seal would succumb to exhaustion and the killer whale pod typically divvied up their catch underwater.

In most cases, little of the seal's remains float to the surface, but in one instance the carcass rose to the surface and appeared to have been methodically skinned and dismembered before being eaten, the team found.

In total, the team observed 14 Weddell seal attacks with 12 of those involving cooperative wave-washing behavior to take down the prey. On average, the whales created four "killer waves" for each successful attack, which lasted about 30 minutes.

Until now, killer whales creating waves to wash seals off ice floes in Antarctica had previously been observed only a handful of times.

A previous study involving the current researchers suggested this very distinctive killer whale population, which they refer to as "pack ice killer whales," is a separate species.