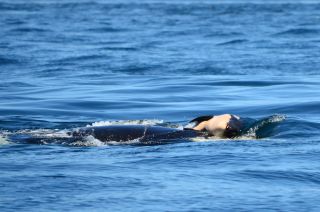 In a heartbreaking scene, researchers watched a dead, newborn orca get pushed around the water's surface by its mother only a half-hour after the baby whale was seen alive in Puget Sound Tuesday (July 24). The calf was the first orca born to this declining population in three years, The Olympian reported.

Researchers are unsure what caused the orca calf to die so soon after it was born, but they know this particular group of large marine mammals have been struggling for decades. Their population has declined from 98 individuals in 1995 to just 75 now, The Olympian reported.

This group of orcas (Orcinus orca), also called the southern resident killer whales, visits Puget Sound every year from spring to fall, and was listed as endangered in 2006, according to the U.S. Fish and Wildlife Service. Scientists cite multiple reasons for the population's decline, but they think it's primarily because of the diminishing stock of these orca's main food source: Chinook salmon (Oncorhynchus tshawytscha). [Image Gallery: Russia's Beautiful Killer Whales]

Research published last summer in the journal PLOS One found that nearly 70 percent of southern resident killer whale pregnancies failed between 2008 and 2014 and that about a third of those failed late in the gestation period or immediately after birth. The scientists attributed the failed pregnancies primarily to the low availability of Chinook salmon. But they also suspected that the deaths could have been caused by pollutants that the nutritionally deprived mothers might have been passing on to their calves.

"On average, we expect a few calves born each year," Brad Hanson, a wildlife biologist with the Northwest Fisheries Science Center in Seattle, told The Olympian. "The fact that we haven't seen any [calves born] in several years and then to have reproductive failure is further evidence that we have a severe problem with the reproductive viability in the population."

Earlier this year, Washington Gov. Jay Inslee formed a statewide task force dedicated to coming up with recommendations for saving this population of orcas. Their report is due out later this year, The Olympian reported.