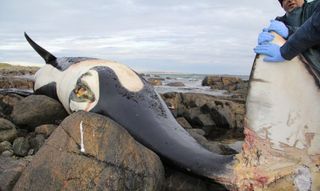 An orca that was found dead last year is now considered one of the most polluted whales ever found: The marine animal contained some of the highest levels of polychlorinated biphenyls (PCBs) — human-made organic chemicals known to cause a variety of adverse health effects — ever recorded.

Lulu, an adult female killer whale, was a member of the last orca pod living near the United Kingdom. When the dead whale was discovered in January 2016 on the Isle of Tiree, Scotland, after becoming entangled in fishing rope, researchers analyzed the orca's body in hopes of determining the health of the rest of the small pod. They found that Lulu might have been the most contaminated whale ever discovered.

The PCB concentrations in Lulu's blubber were 100 times higher than the toxicity level scientists have determined is safe for marine mammals, according to researchers from the Scottish Marine Animal Stranding Scheme at Scotland's Rural College (SRUC). [In Photos: World's Most Polluted Places]

"Previous studies have shown that killer whale populations can have very high PCB burdens, but the levels in this case are some of the highest we've ever seen," Andrew Brownlow, head of the Scottish Marine Animal Stranding Scheme and a veterinary pathologist at SRUC, said in a statement. "We know 'Lulu' died from becoming entangled, but, given what is known about the toxic effects of PCBs, we have to consider that such a high pollutant burden could have been affecting her health and reproductive fitness."

High concentrations of PCBs can cause a range of health issues for marine mammals, including impaired immune function, increased susceptibility to cancers, and infertility, according to the SRUC researchers.

Though Lulu was at least 20 years old when she died, an analysis of the orca's ovaries showed that she had never reproduced. In fact, researchers have not verified a single calf in the 23 years that the U.K. orca pod has been monitored.

"Lulu's apparent infertility is an ominous finding for the long-term survivability of this group; with no new animals being born, it is now looking increasingly likely that this small group will eventually go extinct," Brownlow said. "One of the factors in this group's apparent failure to reproduce could be their high burden of organic pollutants."

PCBs were made for things ranging from microscope oils to electric appliances like television sets or refrigerators, according to U.S. Environmental Protection Agency (EPA). An estimated 1.5 billion pounds of PCBs were madefrom the 1920s until their ban in the U.S. in 1979.

Though most countries have now banned the use of PCBs, the chemicals take a long time to decompose and can accumulate in the environment, according to the EPA. PCBs can also travel long distances, and the chemicals have been found in snow and sea water far from their release into the environment. PCBs already in the environment, or those from oil spills, grow in concentration in animals as an animal from one level of a food web eats another whose tissues hold the contaminant. Because orcas are at the top of the food chain, they are particularly vulnerable to storing large amounts of PCBs in their blubber, according to the wildlife charity Whale and Dolphin Conservation.

According to Brownlow, it is difficult, if not impossible, to remove PCBs from a marine environment. Researchers warn that, without actively assessing and working to decontaminate PCB-affected sites, other marine communities may have the same fate as the small group of killer whales.