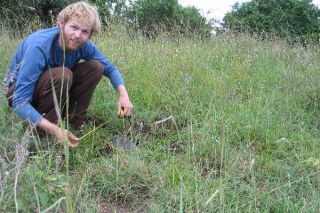 Chris Remien, whose mathematical modeling sheds new light on biomarkers--measurable characteristics (such as the presence of antibodies) that point to a state or condition (such as a state of infection.)
(Image: © David Kimutai)

Not everything we wish to know in biology can be measured directly, either because doing so is too costly or simply impossible. In some cases, scientists can look to biological "signposts," called biomarkers, to infer information. Medical practitioners, for example, can use the presence of certain molecules in blood or tissue to diagnose or predict disease. The proteins known as antibodies are examples of biomarkers indicating possible infection.

Chris Remien, a postdoctoral fellow at the National Institute for Mathematical and Biological Synthesis, uses math to better understand how biological markers relate to the diets of animals and how they metabolize nutrients and toxins. The food and water animals consume leave chemical signatures (biomarkers) in their tissues; however, metabolism sometimes alters these signatures. Remien develops mathematical models to understand how metabolism can change the biomarkers.

Remien's models also help doctors estimate the extent of liver damage following overdose of acetaminophen (the active ingredient in some pain medicines), which is crucial for determining patient survival.

You can read more about Remien's research here. Below, he answers our 10 questions.

I have always enjoyed problem solving, which is what initially drew me to mathematics. Over time, I became more drawn to problems rooted in the real world, in data. Biology asks perhaps the biggest and most exciting questions of the real world, those related to life. The complexity of life means that intuition alone is often not enough and mathematics and simulation can sometimes come to the rescue. It is an exciting time to be a quantitative person asking biological questions.

Trust your gut. A huge part of the art of modeling is simply figuring out exactly what to model, what is important to the question at hand. For the best problems, you have a deep feeling that more information can be uncovered through modeling, even if you don't yet see exactly how it should be done.

I spent a lot of time playing outside as a child, which led me to wonder why things were as they were. Why do these trees grow here, and others grow elsewhere? We would catch tadpoles, put them in our backyard pond, and watch them turn into frogs. Spending time outside has led to a fascination with the natural world that continues to this day.

I love how mathematics allows us to see the unseeable. If we are clever enough, mathematical models can be used to gain information on things that are impossible to measure directly, which is very exciting. I have been fortunate to work with a range of people, from ecologists to medical doctors, asking very different questions. Mathematics highlights similarities between them.

Creativity. The most interesting questions require completely novel approaches. The most creative people are usually the ones driving a field in new and exciting directions.

Another example of the usefulness of stable isotope ratios can be found in the tropics where woody plants and grasses, which use different types of photosynthesis, have very different carbon isotope ratios. We have used stable isotopes to quantify African elephant diet over time as it relates to rainfall history, which is useful information for elephant conservation. Typically, after rainfall, grasses become more abundant and constitute a greater portion of an elephant's diet. Using carbon isotopes in hair, we can see exactly how much grass these animals are eating and how their diet changes with changes in rainfall.

I am greatly indebted to my graduate school mentors Fred Adler and Thure Cerling, who taught me the art of creative problem solving.

I think it's not often appreciated that mathematical modeling is an art. A good model is predictive and useful, but also offers insight into the underlying processes.

My trusty Macbook and a full cup of coffee.

Anything from Modest Mouse to Johnny Cash to classical, depending on the mood of the day.