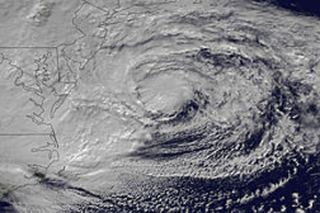 The research adds to a growing body of evidence that hurricanes are becoming more intense as global warming heats the oceans. This means Category 1, 2 and 3 storms will have fiercer winds, bumping them up to Category 3, 4 and higher. Overall, the study's modeling approach predicts a 40 percent global increase in tropical cyclones of Category 3 and higher during the 21st century.

The findings were published in today's (July 8) issue of the journal Proceedings of the National Academy of Sciences.

The new study also projects that these strong storms will become more frequent in the North Pacific, the North Atlantic and the South Indian Oceans.

"We see an increase, in particular, toward the middle of the century," said Kerry Emanuel, study author and an MIT climatologist. "The results surprised us, but we haven't gotten so far as to understand why this is happening."

Scientists actively debate whether tropical cyclones (the broad name for hurricanes, typhoons and tropical storms) will become more frequent, more intense or both as a result of climate change. Global warming has heated the oceans along with the atmosphere, and sea-surface temperature is one of the most important influences on hurricane strength. But other factors — such as climate cycles, like the El Niño Southern Oscillation, and interactions with other storms, which can weaken or strengthen storms — also alter tropical storm strength. Hurricanes are also marvelous heat transporters, affecting climate by moving energy around the planet. [Hurricanes from Above: See Nature's Biggest Storms]

"For scientists, this is far from a solved problem," said Emanuel, who has been a main participant in the debates on the future of hurricanes. "The main message is, we have to continue to regard there being a not-trivial risk of increasing problems from tropical cyclones because of climate change."

Emanuel relies on a technique called downscaling to estimate how future climate change will shift hurricane strength and frequency. In the new study, he used the latest global climate models, called CMIP5, which project future climate change but are too coarse to resolve "small" features, such as hurricanes. Emanuel ran the models at higher-resolution and randomly generated disturbances similar to tropical cyclones, and then used a theoretical model to predict how strong the storms would become. Emanuel first presented this approach, with an earlier version of the CMIP models (CMIP3), in a 2008 paper in the Bulletin of the American Meteorological Society.

One limitation of relying on global climate models to predict future hurricanes is that these models do not capture the past decade's climate variability, such as  relatively stable temperatures between 1998 and 2008, said Peter Webster, a climatologist at Georgia Tech who was not involved in the study. (The hiatus is attributed to natural variability in Earth's climate system, superimposed on the longer-term warming trend.)

"It should be remembered that the study is a model interpretation of how things might be," Webster said. "So, elegant as [the study] is, it is not going to tilt the scales on global warming one way or the other. The scales will be tilted substantially once we understand the role of tropical cyclones in climate and how tropical cyclones, in turn, modify climate itself."

In the new study, the North Pacific Ocean basin showed the strongest change in tropical-cyclone frequency and intensity. This means Asia and its global supply chains will be hit hardest by the changes, with higher-intensity storms striking more often, said Matthew Huber, a climatologist and director of the Purdue University Climate Change Research Center who was not involved in the study. [How Strong Can a Hurricane Get?]

In addition, the model predicts that the North Atlantic and South Indian Oceans will also see an increase in storm frequency and intensity. This contradicts Emanuel's earlier research and other studies based on the previous generation of climate models, which predicted fewer but stronger hurricanes in the North Atlantic, the basin where storms that threaten the East Coast and Southeast form. However, a recent study of coastal storm surge records in the southern United States supports Emanuel's new data.

But Huber said Emanuel's results for the East Coast are not well supported by previous research and should be viewed as less certain.

But something the scientists do agree on is that coastal cities need to improve their defenses, as sea level rise alone will increase the vulnerability of such areas to storm surge.

"The result represents a significant upward revision of previous estimates of tropical cyclone activity in a warmer world, so it is unlikely that communities and states are prepared for, or even preparing for, the magnitude of future risks appropriately," Huber said.