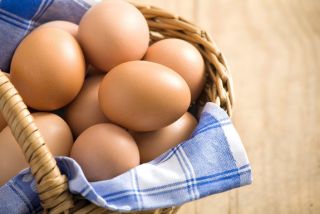 The "6X-degree egg" is a culinary delicacy, but it's not just the temperature that matters. The cooking time does, too.
(Image: © Eggs via Shutterstock)

Katherine Tallmadge, M.A., R.D., is a registered dietitian; author of "Diet Simple: 195 Mental Tricks, Substitutions, Habits & Inspirations" (LifeLine Press, 2011); and a frequent national commentator on nutrition topics. This article was adapted from one that first appeared in the Washington Post. Tallmadge contributed this article to LiveScience's Expert Voices: Op-Ed & Insights.

Are you shying away from "bad" foods that are actually good for you? With all the hoopla about healthful eating, it's hard to separate fact from fiction.

As a nutrition consultant, I've come to realize there is no shortage of surprises and superstitions in the world of nutrition . As a follow-up to 5 So-Called Health Foods You Should Avoid, I thought it would be fun to give you reasons to enjoy some of your favorite "bad" foods that could actually be good for you.

They are "the most demonized ingredients beyond high-fructose corn syrup and hydrogenated oil," said Melissa Abbott, culinary director at the Hartman Group, a company specializing in consumer research. Yet decades of studies have found that gluten-containing foods — such as whole wheat, rye and barley — are vital for good health and associated with a reduced risk of diabetes, heart disease, cancer and excess weight.

"Wheat is a good source of fiber, vitamins and minerals," said Joanne Slavin, nutrition professor at the University of Minnesota. She added that the confusion about gluten, a protein, has caused some people to avoid eating wheat and other grains. Only about 1 percent of the population — those with celiac disease or a wheat allergy — cannot tolerate gluten and must eradicate it from their diet to ease abdominal pain and other symptoms, including the ability to fully absorb vitamins.

One reason wheat-free or gluten-free diets are popular is that people who don't eat wheat often end up bypassing excess calories in sweets and snack foods. Then, they start feeling better, lose weight and mistakenly attribute their success to gluten or wheat avoidance. Learn more about a gluten-free diet and who may benefit from it in Go Gluten Free? Most People Shouldn't (Op-Ed).

Interestingly, some of the biggest egg eaters in the world, the Japanese, have low cholesterol and heart-disease rates, in part because they eat a diet low in saturated fat. In contrast, Americans eat eggs alongside sausage, bacon and buttered toast.

"The amount that one egg a day raises cholesterol in the blood is extremely small," says Walter Willett, professor of epidemiology and nutrition at Harvard's School of Public Health. "Elevations in LDL (bad) cholesterol of this small magnitude could easily be countered by other healthy aspects of eggs."

Potatoes have been blamed for increasing blood glucose levels, insulin resistance, excess weight and Type 2 diabetes. A recent Harvard study that followed large populations and their disease rates linked potato consumption with being overweight, blaming it on the blood glucose rise.

But many foods, including whole-wheat bread and whole-grain cereals, cause similar spikes in blood glucose, and are correlated with superior health and lower body weights.

How could the higher body weight in the Harvard study be explained? The study lumped all potato products together — including potato chips and french fries, which are, of course, very fattening versions of potatoes usually eaten in large portions alongside hamburgers, hot dogs and sodas.

"It's an easy food to attack, but the meal pattern may be the culprit," said David Baer, a research leader at the Agricultural Research Service of the Department of Agriculture. "Other epidemiological studies have not verified a connection between potatoes and weight gain or any diseases, and no clinical studies have shown a connection.".

Potatoes are a great source of potassium, vitamin C and fiber that many cultures — Scandinavians, Russians, Irish and Peruvians — relied on as a nutritious staple for centuries. And they were not fat.

People often ask me if fruit is too high in sugar, especially for diabetics. This fear of fruit, I believe, is left over from the Atkins craze, which discouraged eating some fruits on the grounds that they are high in carbohydrates.

Avoiding fruit could actually damage your health. Study after study over many decades has shown that eating fruit can reduce the risk of some cancers, heart disease, blood pressure and diabetes. [10 New Ways to Eat Well]

Fruit is high in water and fiber, which help you feel full with fewer calories — one reason why their consumption is correlated with lower body weight. Even though they contain simple sugars, most fruits have a relatively low glycemic index. That is, when you eat fruit, your blood sugar raises only moderately, especially when compared with refined sugar or flour products. Several health organizations — including the U.S. Department of Health and Human Services and the U.S. Department of Agriculture (USDA) (via the U.S. Dietary Guidelines), the National Cancer Institute, and the American Heart Association — recommend Americans eat at least five cups of fruits and vegetables a day because of their superior health benefits.

Though popular for centuries in many Asian cuisines, soy is sometimes seen as dangerous after studies found elevated rates of breast cancer among rats when they were fed a concentrated soy derivative. But studies looking at whole soy foods in humans have not found a connection. In fact, the reverse may be true.

Soy, "when consumed in childhood or adolescence, may make breast tissue less vulnerable to cancer development later in life and probably has no effect on breast-cancer risk when consumption begins in adulthood," said Karen Collins, registered dietitian and nutrition adviser with the American Institute for Cancer Research.

Actually, Collins said, the evidence is so strong that soy protects against heart disease that the FDA allowed a health claim for labels on soy food products. [12 Tips for Eating Healthy on a Budget ]

Alcohol is feared because of the potential for abuse and alcoholism, as well as complications such as liver disease — which are all valid concerns.

But decades' worth of research shows that moderate alcohol consumption "can reduce deaths from most causes, particularly heart disease, and that it raises HDL (good) cholesterol," the USDA's David Baer said. Wine may have additional benefits because its grapes are filled with nutrients called polyphenols, which reduce blood clotting, inflammation and oxidation.

The key is to drink alcohol moderately and with meals. What's moderation? One serving daily for women and two servings for men, with a serving being 5 ounces of wine, 12 ounces of beer or 1.5 ounces of spirits.

While it's true that frying food usually increases its caloric content, that doesn't necessarily make it unhealthful.

As long as food is fried in healthful oil instead of butter, shortening, or trans fat, and it's eaten in moderation, it isn't less healthy. In fact, fat-soluble vitamins A, D, E and K; and heart-healthy, cancer-preventive carotenoids, such as beta-carotene (found in carrots and sweet potatoes), lycopene (found in tomatoes) and lutein/zeaxanthin (found in deep-green leafy vegetables such as spinach and kale), need fat in order to be absorbed by the body.

The views expressed are those of the author and do not necessarily reflect the views of the publisher. Her latest book is "Diet Simple Farm to Table Recipes: 50 New Reasons to Cook In Season". This article was originally published on LiveScience.com.