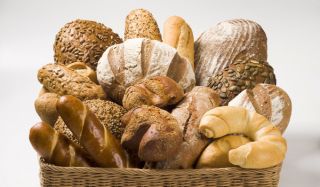 A diet very low in carbohydrates (such as bread) can lead to ketosis.
(Image: © Viktorfischer/Dreamstime)

It's all the rage right now; in fact, you may be thinking of going on a gluten-free diet yourself. Before you do, here are some things to think about. Originally, gluten-free diets were designed to combat celiac disease, a serious autoimmune disorder that virtually destroys the intestinal tract. Celiac affects about 1 percent of the population and is reversed by taking gluten out of the diet. But the danger of self-diagnosing and taking gluten out of your diet prematurely is that you would never be able to get an accurate diagnosis of your symptoms. An intestinal biopsy is the only way to detect celiac definitively.

People try gluten-free diets in response to feeling tired, bloated or depressed, and find reducing gluten correlates with feeling better or losing weight. But that outcome is more likely because they've cut out the excess calories found in many flour-based snack foods, and they mistakenly attribute feeling better to taking out the gluten. So, before you rush into a gluten-free diet, why not try something simple, say an apple ... or exercise? Or would you prefer a life of no bread, pasta or birthday cakes?

It's a tough row to hoe, and I'm here if you need me, as studies have found gluten-free diets can be seriously nutrient-deficient — low in fiber, iron, folate, niacin, thiamine, riboflavin, calcium, vitamin B12, phosphorus and zinc. That's because so many "gluten-free" products are made with refined, unenriched grains and starches, which contain plenty of calories but very few vitamins or minerals.

The new gluten-free industry is making millions from Americans' desperation to feel better. There has been an explosion of gluten-free junk foods, and I hope you don't become a victim.

But I have great news: many of my clients have thought they might need a gluten-free diet, but when we worked together at improving their nutrition and life balance, the symptoms vanished! Perhaps that could work for you, too?

If you take the following steps and find you do need a gluten-free diet, it can still fill all your nutritional requirements, but only if done carefully.

How to check if you need a gluten-free diet

1. Have a complete check-up with your family physician.

3. If you do not have a wheat allergy or celiac disease, visit a registered dietitian to verify that you are eating a balanced diet with plenty of nutrient-dense, naturally fiber-rich foods and that you are getting adequate physical activity. A healthy diet and lifestyle reduce negative gastrointestinal symptoms and inflammation, boost the immune system, improve brain function and reduce depression and anxiety. If you are overweight, you need to lose weight, as body fat can be toxic. It produces hormones and pro-inflammatory chemicals that regulate metabolism, the immune system, inflammation and the progression of artery hardening. When you have less body fat, you get many biological benefits and feel better.

4. If symptoms persist (though they will not in most cases), you may be one of the rare people who are "gluten sensitive" — though hopefully not, as it's a tough life. To confirm the diagnosis, and if a gluten-free diet is absolutely necessary for you — even though a gastroenterologist has verified you do not have celiac disease — visit your gastroenterologist, or the University of Maryland's "Center for Celiac Research." They specialize in detecting "gluten sensitivity," which may be a newly identified disorder.

Gluten is a protein in wheat and some other grains, such as rye and barley. A gluten experiment in food science at the University of Maryland left a lasting impression on me about the function and importance of gluten. I kneaded bread dough under flowing water. As I kneaded the dough, the starch slowly washed away. What remained was a rubbery mass — the gluten — the protein in wheat that gives bread its structure.

What are examples of gluten-containing foods that appear on food labels?

What are examples of naturally gluten-free whole grains?

What are wheat allergy, celiac disease and gluten sensitivity?

Anna Sapone, of the Mucosal Biology Research Center and Center for Celiac Research and her colleagues at the University of Maryland School of Medicine reported on and defined these diseases in the journal BMC Medicine in 2012.

Celiac disease is an immune-mediated enteropathy (intestinal disease) triggered in susceptible individuals by the ingestion of gluten. The onset of symptoms is usually gradual and characterized by a time lag of months or years after gluten introduction.

Doctors diagnose gluten sensitivity when both allergic (wheat allergy) and autoimmune mechanisms (celiac disease) have been ruled out through diagnosis by exclusion criteria; individuals who experience distress when ingesting gluten may be considered as having gluten sensitivity.

It is critical that you be examined by a gastroenterologist before switching to a gluten-free diet. Why? Once you eliminate gluten, it is virtually impossible to diagnose celiac disease, and the diagnosis of this extremely serious autoimmune disorder should be your primary concern.

Anyone giving gluten-free dietary advice should be a registered dietitian, with "R.D." listed after his or her name.

For more on the topic, listen to the author and three other experts discuss the gluten-free craze on National Public Radio's "The Diane Rehm Show" and watch her in an interview on ABCNews 7.

The views expressed are those of the author and do not necessarily reflect the views of the publisher. Her most recent book is "Diet Simple Farm to Table Recipes: 50 New Reasons to Cook In Season". This article was originally published on LiveScience.com.