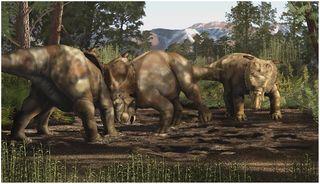 This artistic rendering of Pachyrhinosaurus perotorum shows the dinosaurs head-butting each other.
(Image: © PLOS ONE, doi:10.1371/journal.pone.0065802.g001)

Dinosaur skeletons unearthed in polar regions have changed scientists' ideas about the range of the ancient beasts. In one of the latest such finds, paleontologists say they've discovered the skull of a young plant-eating dinosaur in sediment from Alaska's North Slope, well inside the Arctic Circle.

The dinosaur, dubbed Pachyrhinosaurus perotorum, was a massive herbivore with a broad, bony frill protecting its neck, a thick bone above its nose and a lumpy bulge at its snout, thought to be used for head-butting.  It belonged to the ceratopsids, a group that included the Triceratops found mainly in the western part of North America.

Researchers from Dallas' Perot Museum of Nature and Science previously identified an adult version of the creature in 70-million-year-old Late Cretaceous sediments from Alaska's Prince Creek Formation. After an excavation at the site in 2006, the team shipped 12,000 pounds (5,443 kilograms) of sediment-encased bones back to Dallas, where museum preparators have been poring over dinosaur remains. [Images: Dinosaur Skeletons Hidden in Rock]

"In our early years of work, we initially thought we had only had one age profile — that of an adult," Earth sciences curator Anthony Fiorillo said in a statement. "But as the preparation work has continued in recent years on the additional blocks from that same Alaskan expedition site, it was a true 'aha' moment to find the younger skull as well."

The museum's fossil preparator, Ronald Tykoski, discovered part of the young dinosaur's skull while working on a small block about the size of a football last year.

"It had features on it that looked like the big adult skull of the Pachyrhinosaurus perotorum that we had originally found, yet it was very narrow and skinny and didn't have the big expanded nose of the adult," Tykoski said in a statement. "After ruling out all of the possibilities through the process of elimination, we realized this was a juvenile specimen. This provided us a snapshot in the development of the species — and that's not common — so this was a very exciting moment for us."

Even though the Earth's poles were warmer during the Late Cretaceous Period, they were thought to be inhospitable homes for dinosaurs. Specimens from the Arctic and Antarctic were often thought to represent migrating dinosaurs that traveled long distances each year to avoid the polar winter. Finding a juvenile specimen in the Arctic suggests that the species at least was "reproducing and living there contentedly," Fiorillo explained.

The findings were detailed in the journal PLOS ONE this month.